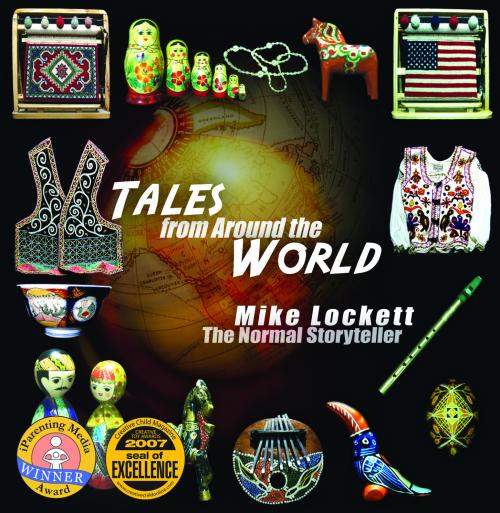 New Product - Release of New Storytelling Product  "Tales from Around the World" is a collection of ten folktales as told by Dr. Michael Lockett, "The Normal Storyteller."  Each story is from a different part of the world.  The stories are told in dialects that capture the spirit of the regions where the tales were first told.  Local Musicians, Mark Lockett, Marty Abbott, Raylene Lowe, James Lowe and Leah Bauersfeld added to the beauty of the production by playing folk tunes from the different ethnic regions.  The blend of stories and music is captivating to the ear.  The stories are all family friendly and suitable for children and adults who still want to enjoy the memories of childhood.

Michael Lockett taught in Normal, Illinois for 21 years.  Students from schools where he taught, along with the Cub Scouts and Boy scouts he worked with, and boys and girls from church and libraries came to think of him as the Normal Storyteller.  They could always count on a fun filled story to accompany a lesson or reward them for a job well done if Mr. Lockett was the teacher.  After receiving his Doctorate in Curriculum, Lockett followed his teaching experiences by serving as a school administrator in Peoria, Illinois for twelve years.  It was a NORMAL experience for Dr. Lockett to share stories when he visited classrooms or met with teachers and administrators.  It even played in Peoria to call him "THE NORMAL STORYTELLER."

Today, Dr. Lockett takes storytelling and educational messages to groups all across the USA.  A teller of traditional tales, Lockett specializes in audience participation stories.  "I have more fun when audiences join in with the telling," says Lockett.  Judging from the laughter when "The Normal Storyteller" is speaking to a group, they do exactly that! During his years as a teacher in Normal and administrator in the Peoria Public Schools, Dr. Lockett gave more than 1200 presentations to schools, libraries, churches and gave many keynote talks for educational and fraternal organizations.

Retirement has not dulled this storyteller.  Since his retirement from the position of high school principal at Greeley Alternative School in Peoria, Lockett has concentrated on developing new stories and reaching out to new audiences.  He has started a new small company, Heritage Schoolhouse Press, to publish materials related to storytelling and plans to also author children's books.   He will be featured later this month at two major educational conferences, the Illinois Reading Conference in Springfield and the No Child Left Behind Conference in Chicago.

"Tales from Around the World" has been in production for the last two years and was completed and sent to Press on February 7, 2006.  This project is the second storytelling production by Lockett.  His first CD was "Tales from the Hills," a collection of Appalachian tales, released in 2000 with a second printing in March, 2006.  Lockett stated that he hopes to release two more CD's in June or July.

Click the link below to purchase the CD on line. http://cdbaby.com/cd/mikelockett2