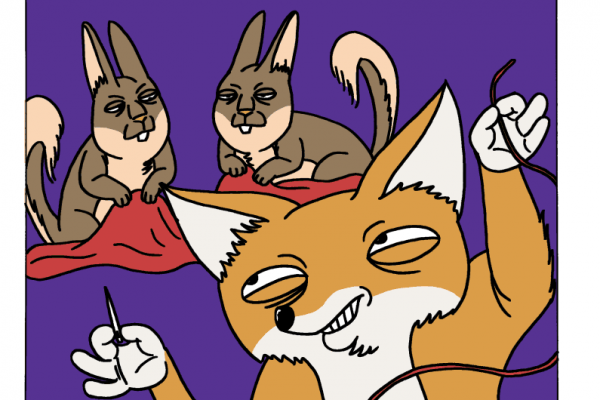 Not very long ago two little Viscachas lived in the grasslands on the pampas of Argentina.  The Viscascas were rodents like their cousins, the mice.  But, while mice are small, viscachas are same size as small rabbits.

The two Viscachas were good amigos (friends).  They played together.  They shared everything with each other.  If one found a nut to eat, both gnawed until the nut was gone.  It was very pleasant to live on the great pampas of Argentina.  The day times were comfortable.  The two had enough to eat and enough to drink.  The only problem they had was that at times the night air became very cold.  When the wind blew, both Viscachas shivered throughout the night.

One day as they played, they saw something red caught on a bush.  When they got close, they saw it was not one object - but two.  Two pieces of a red blanket had either been thrown away by someone or had blown away in the Argentine wind.  The blanket had ended up in the bushes near where the two friends lived.

"This is a treasure," said one Amigo to the other.  "A blanket to keep us warm at night."

"A better treasure if the blanket was still sewn together instead of torn into two parts," his friend reminded him.  "Some person must have forgotten it or thrown it out because it was torn."

"Let us try to fix it," said the first amigo.  "It is not big enough to keep either of us warm right now."

As the two amigos sat sniffing the air and wondering what to do with their treasure, Señor Fox came along.  He had a long nose and a long tail and a crafty brain.

"Buenos Dias, Amigos. Good day, friends," said the Fox.  "What have you here?"

"We have found a treasure," both answered at once.  "We found a blanket that can keep us warm on cold nights.  But it is too small for either of us unless we can find a way to sew it back together."

"You are in luck," said the crafty Fox.  "I happen to own a needle and thread that you may use if you will let me share your warm blanket on cold nights."

Señor Fox loaned them the needle and thread.  He watched them sew the blanket together.   He took his needle back and went on his way.  The two amigos were so happy.  They ran about in the warm sunshine during the day finding bits of food and playing games together.  Then night came.  A cold wind started to blow over the pampas.  The two Viscachas ran to where they had their blanket stored and saw Señor Fox coming towards them.

"Remember the bargain we had?" he asked.  I gave you my needle and thread to sew up your fine red blanket.  You promised that I could share it on cold nights."

Then Fox said, " Since my thread sewed up the middle of the blanket, I should sleep in the middle."  He crawled right under the middle part of the blanket and left the two Viscachas under the outside edges of the blanket.  The side of them next to the Fox was warm.  But, their other side was cold and uncomfortable.

Note: A good source for tales from South America is The King of the Mountains, A Treasury of Latin American Folk Stories, written in 1960 by M.A. Jagendorf and R.S. Boggs.  The two collected more than five dozen tales from across Central and South America and retold them for the children of the world.

Dr. Mike Lockett is an educator, storyteller and children's author from Normal, IL. Dr. Lockett has given more than 4000 programs across the USA and as far away as eastern Asia. Contact Mike by writing to Mike@mikelockett.com in order to book him for a storytelling program or young authors program or to inquire about purchasing his books and CDs. The illustration at the top was created by Chung - Yi-Ru, copyright 2014, owned by Mike Lockett.  More stories and information about storytelling can be found at www.mikelockett.com.