Why Chickens Scratch the Ground 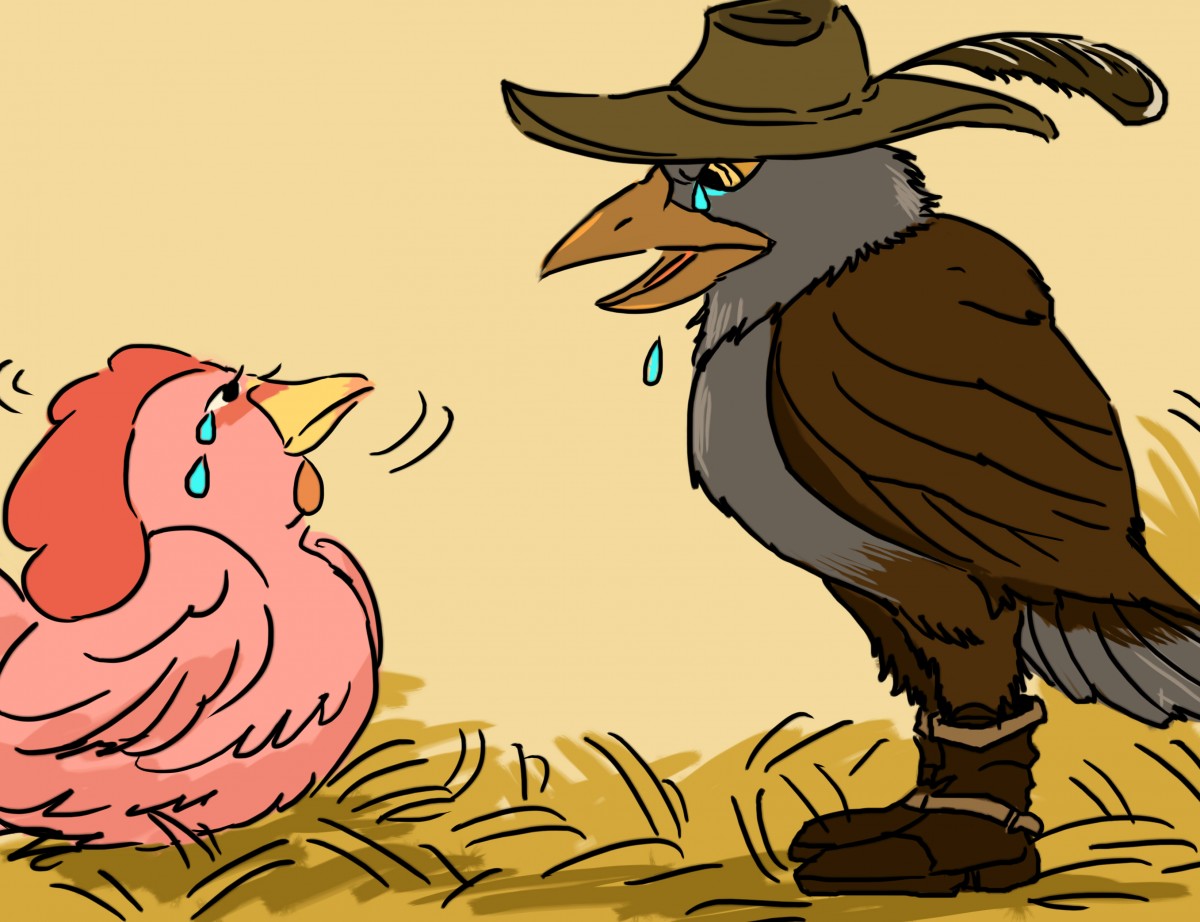 A long time ago, the hawk flew over a chicken yard.  He looked down to see a beautiful hen.  Day after day, he flew over the same chicken yard.  One day the hawk developed enough confidence to come down out of the sky to talk to the hen.  It did not take long until the hawk fell in love.

The hawk asked the hen to be his wife.  She accepted right away but stated, "I cannot marry you until I have feathers as nice as yours so I can fly high in the sky beside you."

The hawk agreed to this.  He placed a ring around her neck.  "Wear this ring to show that you have promised to marry me.  Take good care of it.  I will be back soon with a new coat of feathers to wear.  Soon, we will be married."

The next day the hen walked around the chicken yard with her head held high.  All the hens clucked and admired her new ring.  Two other eyes saw that ring.  They belonged to the rooster.

This made the hen throw away the ring.

Shortly after that, the hawk flew down to the chicken yard.  He carried a beautiful coat of feathers.  "Where are you, my love?" he asked.  "I brought the feathers you need to fly high in the sky."

The hen saw the hawk.  She was embarrassed and ran off to hide.  The hawk flew around the yard until he found her.  Right away he saw that the ring he had given her was gone.  "Where is my ring?" he asked in an angry voice.

She tried to tell several stories about losing the ring.  Then she finally told the hawk the truth that she had thrown the ring away.

"I cannot believe that you could be so cruel," said the hawk.  "I want my ring back.  You start scratching around right now.  Then keep scratching until you find my ring!"

"There is one more thing you need to know," said the hawk.  From now on I will consider you, the rooster and all other chickens my enemies.  I will eat every chicken I can catch until you find my ring!"

The hawk flew away.  The chicken told every chicken she knew what had happened.  Every since, all chickens in the world have been scratching the ground trying to find that ring.  Also ever since, the favorite meal of every hawk is chicken.

Dr. Mike Lockett is a storyteller and children's author. Dr. Lockett lives in Normal, Illinois and is often called The Normal Storyteller. Contact Dr. Lockett for bookings at Mike@mikelockett.com. Visit www.mikelockett.com for more stories by Dr. Lockett. This story was adapted from Phillipine Folktales by Mabel Cook Cole (Chicago, 1916).  *The original story was called The Hawk and the Hen from the island of Visayan.