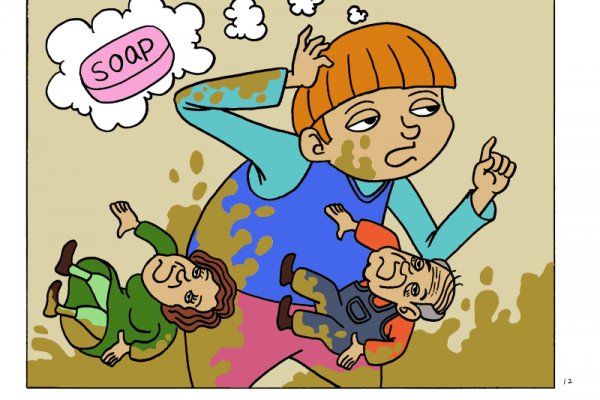 A long time ago, there was a boy named Jack.  Now, Jack couldn't seem to remember anything!  His mamma was fixin' to wash a bunch of clothes.  She had her washboard.  She had drawn water from the well.  She filled a wooden barrel three quarters full of water.  Then she saw her handmade soap supply was low.

An old man in a pair of faded bib overalls was walking the opposite way of Jack and stopped when he saw Jack looking confused.  He kept trying to ask the boy what he had lost.  Jack just kept repeating, "Here I had it; there I lost it."

As the man came closer, he also slipped on the same piece of slippery clay and landed on his own bottom.  This made him so angry that he shook Jack and told him, "You should say, 'Sorry I did it.  Won't do it again!'"

She grabbed Jack by the arm and without thinking threw him into the mud.  She said, "I'm OUT, and you're IN!"  Then she left her groceries in the mud and walked off.

The man heard and thought Jack was talking to him.  He was furious and shouted, "You shouldn't say, 'I'm OUT, and you're IN!'  Instead, You should say, 'One's OUT.  Get the OTHER'N OUT.'"

She heard Jack saying, "One's out..." for the second time and stepped in front of him and told him, "That's NOT POLITE!"  What you SHOULD say is, "One's in anyway!"

So - off Jack went repeating, "One's in anyway!  One's in anyway."  He continued on his way to the store - still not remembering why he was going to the store in the first place.  He started over the creek where two little boys were playing on the rail of the bridge.

One of the boys fell into the creek just as Jack came by saying, "One's in anyway!"

The mother of the boys was there to help the boys.  She heard Jack's comment.  She was about to tell him what to say - but saw how dirty Jack looked after all his time spent in the mud that day.  He looked like he needed a bath.  She said, "Boy, you need a bath.  Be sure to use plenty of SOAP!"

Jack bought his soap and took it home to his mama.  There he took his bath and used lots of SOAP while his Mama did her laundry, still amazed that Jack had remembered what she wanted.

Dr. Mike Lockett is an educator, storyteller and children's author from Normal, IL. Dr. Lockett has given more than 4000 programs across the USA and as far away as eastern Asia and the middle east.  Contact Mike by writing to Mike@mikelockett.com in order to book him for a storytelling program or young authors program or to inquire about purchasing his books and CDs.  The illustration at the top of this story is by Chung Yi-Ru, Copyright, 2014, owned by Mike Lockett.   More stories and information about storytelling can be found at www.mikelockett.com