The Sword of Gideon 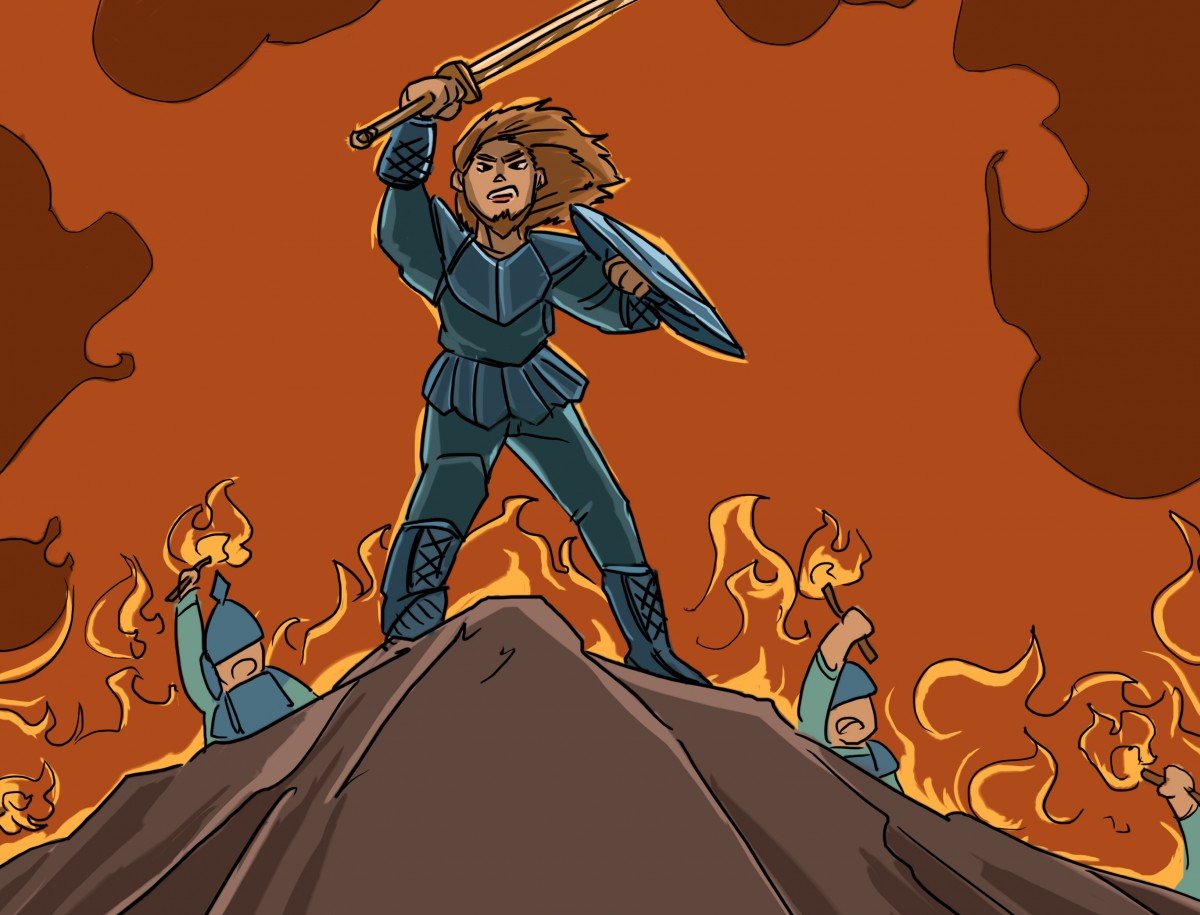 It happened again!  The people of Israel forgot about God and the way He had always helped them.  So, God stepped back and left them on their own.  This was not a good thing, because their enemies came in and overpowered them.

The enemies were called the Midianites.  The Midianites would wait until the crops were harvested then swoop down on the countryside and carried off all the grain and ripe grapes and olives.  The Midianites rode in with men from fierce desert tribes on camels and stole the sheep and cattle and even the donkeys.

The Israelites hid in caves and in hiding places in the hills until their enemies left.  Without God to watch over them, they were afraid.  Afraid and hungry.  Their enemies hardly left enough to keep them alive.

Yet, when the enemy was gone, the Israelites would come out of hiding and replanted each time thinking, MAYBE they won't come back again.  Maybe this time, we can harvest our crops and have enough to eat.

After seven years, they finally got wise and called on God to help them.

This is how the story of Gideon begins.

Gideon came out of hiding.  He waited until no one was around.  Then, he took grain that he had hidden in a hollowed out rock where grapes were usually pressed when the grapes were ready to pick.  What a good hiding spot.  He has just finished beating the grains off the stalks of wheat so it could be used to make flour for making bread and for other meals when he was surprised by the appearance of a stranger.

"God is with you, BRAVE and MIGHTY MAN," the stranger said.  "God is sending you with all your strength to rescue the people of Israel from the Midianites."

"With MY help," said the stranger.  "I will be with you, and you will crush all of your enemies as if you were fighting one man."

"God can't mean me," thought Gideon, then he thought someone must be playing a trick on him.  So he tried to stall until he could find a way to see if God really DID mean him.

"Please wait right there, while I get you some food," said Gideon.  Maybe he thought that if the stranger ate like a normal man - that he would be a normal man, someone playing a trick on him.

Gideon hurried off and returned carrying a basket with meat and fresh bread in it and a jug with broth to drink.

"Put the meat and bread on this rock," the stranger told him, "And pour the liquid broth over it."

Gideon did as he was told, but still thought, "God can't mean me!"  Then the strange touched his staff to the food, and a flame shot up from the rock and burned up the food.

"That's not how a normal person would eat," thought Gideon, and he knew that the stranger was really a messenger from God.  But even as the messenger disappeared, Gideon couldn't help but think, "God can't mean me!  Maybe he wants me to tell someone else to help him."

"God, if YOU have chosen ME to rescue Israel, please give me a sign!" He prayed.  "Tonight, I will put a fleece of wool in the place where we thresh wheat.  If the wool is wet with dew tomorrow morning and the ground is dry, I shall know that you have really called me!

The next morning, Gideon picked up the fleece.  It was so wet that he wrung a bowl of water from it.  Yet the ground around it and under it was dry.  "God CAN'T mean me!" thought Gideon again.  "Please don't be angry, God," he prayed.  "Show me once more time that you really do want my help and that you want to use ME to lead Israel.  This time, God, I will put the fleece on the floor.  When I get up in the morning, if the floor is wet and the fleece is dry, I will REALLY know that you really want to use me."

But God DID mean him!  In the morning, the Fleece was dry, but the ground was WET!

Then, he asked God what he was supposed to do.  He was worried about having to fight, and he was still afraid of the Midianites.  But God didn't tell him to fight a battle.  God told him to tear down an altar to Baal - an idol the pagan people worshipped and to build a strong altar to the one true God.  Gideon remembered God's words that, "I am the ONE TRUE GOD!  Thou shalt have NO other gods before ME!"

He knew he would have to obey God.  It was better to tear down a statue than to fight an army.  And, God didn't tell him that he had to act brave about it, So, in the middle of the night, Gideon got ten of his servants to help him, and he tore down the altar to Baal and cut down the trees that had been planted around it.  Then, he and his servants built an altar to the real God.

But, when ten people know a secret - it doesn't stay a secret for long.  Very shortly, everyone knew who to blame.  They came the next morning to the home of Gideon's family.  "Bring out your son," they shouted.  "We are going to kill him for what he has done."

But, even though Gideon had been afraid, he had done what God had asked him to do.  Gideon's bravery made his father act brave.  His dad said, why should you punish my son?  If your statue of Baal is really a god, let HIM punish my son - IF he can!

Then, other people became brave and stood up to the crown.  Yeah!  Let Baal punish Gideon if Baal is real.

Guess what?  Baal was NOT real, and No one did anything to Gideon.

That made all the men of Israel brave enough to join Gideon in fighting the Midianites.   Thirty-two thousand men volunteered to join Gideon.  Gideon must have thought, "God DOES mean ME!"

Still, Gideon worried about the odds.  There were 120,000 of the enemy.  Thy were outnumbered four to one.

But God told Gideon that he had TOO MANY MEN.  "People need to know that I am giving them the victory.  Large numbers of men will not win the battle for you.  Tell any soldiers who are afraid to go home."

Gideon called the men together and said, "If any of you are afraid to fight in battle, go home to your families now.  No one will blame you."

"The army is STILL too large," said God.  "Tell the men to go for a drink from the spring and watch them drink."  The men obeyed Gideon.  Most of the men laid down in their heavy armor and lapped up the water like dogs.  Gideon watched a few who knelt down and cupped their hands together and scooped up the water.  God told Gideon to use these men in his army.  There were only 300 of them left.  "With these 300 men, I will give you a great victory over the Midianites," said God.

Then, Gideon thought, "God can't mean me!"  And he became afraid again.

"If you feel afraid," God told him, "Go with your servant to the enemy camp, and listen to what the Midianites are saying."

So, in the night, Gideon sneaked over to the enemy camp.  He was able to hide in a place where he could hear the guards talking to one another.  "I had a terrible dream," said one soldier.  "I dreamed that a loaf of barley bread rolled down the hillside and knocked into my tent and knocked it flat."

"I know what that means," said the other guard.  "That little loaf stands for Gideon, the leader of the Israelites.  He is going to attack us and win."

Gideon was no longer afraid.  GOD DID MEAN HIM!  God meant to use Gideon to do His work.  "Get up," he called to his 300 soldiers.  He divided them into three groups of 100 each.  Each man was given a torch of oiled wood and a clay jar and a trumpet made of ram's horn.  All the men trusted Gideon because he spoke for God.

The men lighted their torches and put them into the jars, so their light would NOT shine, and so they would not get blown out.  The three groups divided so one was on each side of the Midianite army.  The men were told to do exactly what his group did.

Most of the enemy was asleep, and the guards did NOT see or hear the three hundred men when they arrived.

Then, when Gideon gave the signal, his hundred men blew a rousing blast on their trumpets.

At once the other two groups blew their all around the Midianite camp.

"A Sword for the Lord and Gideon," they shouted.

At that moment, Gideon and his men shattered their clay jars on the ground making a mighty crash and let the full light of their torches light up the darkness.

The screaming of the men and the crashing sounds and the sudden appearance of lights all around them spooked the camels, and they began kicking and biting and stampeding over the Midianites; knocking down tents and stepping on the sleeping soldiers.  The soldiers woke from their sleep in all of the confusion and began to hit out at anyone close to them.  They attacked each other in the camp.

Gideon and his men stood around the camp yelling and shouting, but they did not need to strike a blow.  With God's help, the Midianites were defeated, and this terrible enemy ran from the camp in every direction possible.

God did mean Gideon.  But, God was there to help every step of the way.

The people wanted to make Gideon their King.  But Gideon told them there was only one true king, THE LORD GOD!

Israel lived in peace for forty years after that!