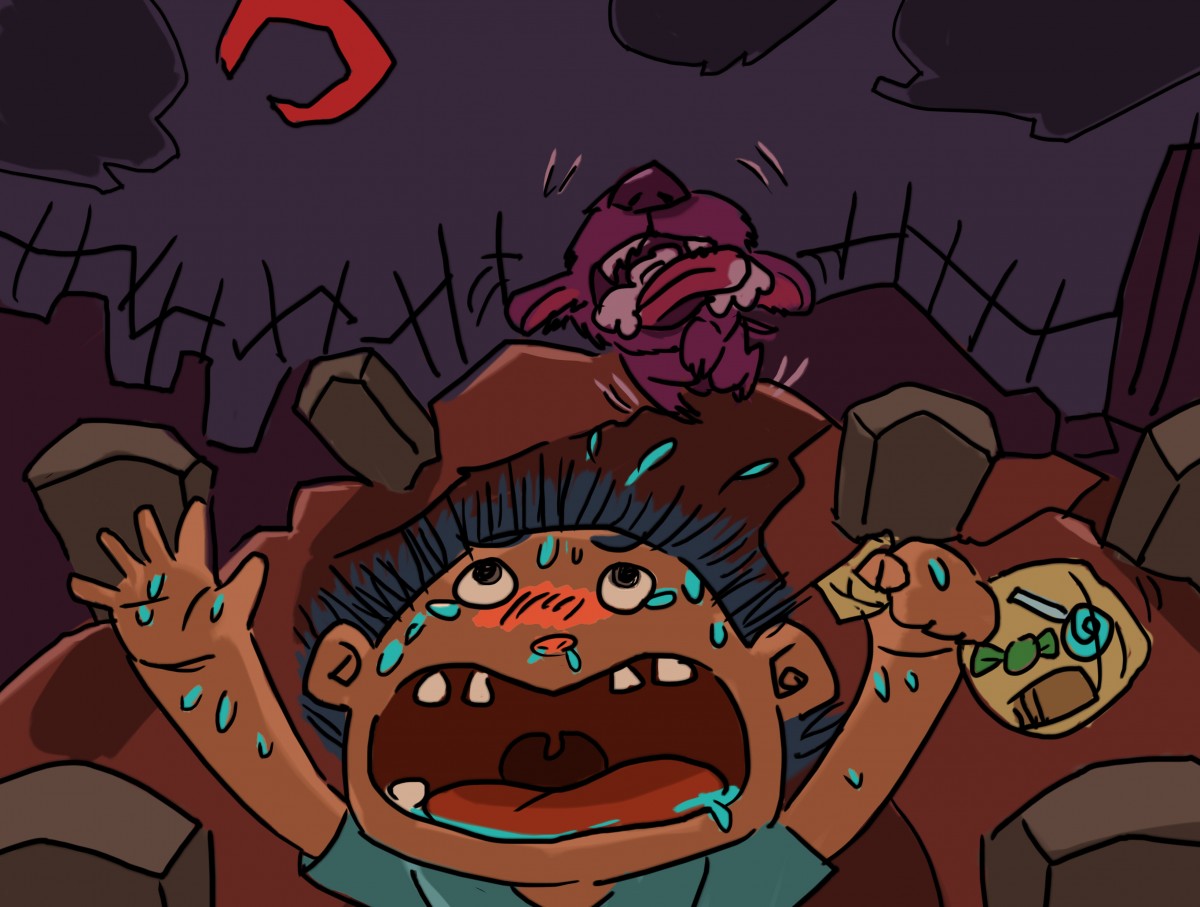 Mark put on his pirate costume.  Arrrgh... he was ready for Halloween night.  He had his candy sack in hand.  Mark was ready to trick-or-treat.  This would be the first time he went out by himself on Halloween.

Mother called Mark to remind him of some rules before allowing him out of the house.  "One," she said... "Stay with your friends.  It is safer at night to be with a group of people.  Two, be sure to always say thank you - no matter what kind of treat people give you.  Three - I know you love gum!  But if people give you gum... only chew one piece at a time."

Mother added, "Mark... When you are done with your gum, wrap it in the paper it came in.  Throw it in the trash.  Do NOT litter.  Two more things... Do not stay out too late.  AND - DO NOT come home through the cemetery on the way home.  I do NOT want you thinking something is following you again.  You always imagine something is after you when you go in the cemetery."

"Have a good time," said Mother.

Mark ran down the street.  At first, he stayed with his friends.  A woman put a caramel apple into Mark's bag.  Mark did not like caramel apples.  But, he said "Thank you," because his Mother had said to say thank you.

The lady at the corner house gave Mark a whole package of gum.  "Thank YOU!" Mark said.  He put one stick of gum in his mouth and put the rest of the pack into his sack.  Chomp, Chomp Chomp... Mark chewed on the gum as he ran from house to house.  He always said, "Thank you," at each house.  Whenever Mark was given gum, he put one piece in his mouth and the rest into his sack.  Soon, his mouth was filled with a HUGE wad of sticky gum.

Mark ran from house to house.  He had NOT stayed with his friends.  AND - he stayed out too late.  The lights on the houses began going out.  It became really dark.  Mark knew he had to hurry home, or he would be in trouble.  There was a shortcut that could save him time... right through the cemetery.

Mother had said not to go through the cemetery.  But, Mark would be braver this time than the last time he walked into that dark and scary place.  Just to be safe, however, Mark turned around to be sure nothing was following him.  Then he did one more thing...

Mark took the HUGE wad of chewing gum out of his mouth.  He tried to put it into one of the tiny gum wrappers.  It did not fit.  It was a large sticky mess.  Mark threw it in the direction of the trashcan, but he did not look to see if it hit or missed the can.

Mark took a few steps into the cemetery.  Then he thought he heard something by the can.  He turned around, but nothing was there.  He took a step towards home.  Then he heard his name.

"Mark!" the voice said.  The voice was low and growly...  Mark stopped for a second.  He did not want to turn around.  He was brave.  Nothing was following him.  He took two more steps.

"Mark!" the voice said again.  No, he would not turn around... Mark was brave.  Nothing was following him.  Just the same, Mark walked a little faster.

He heard dry leaves crunching behind him.  "Mark," the voice called again.  Maybe it was another trick-or-treater.  It would be rude not to turn around to see a friend.  But, when Mark turned around.  Nothing was there.

Oh, no... something was following him, and he could not see what it was.  More than that... it knew who he was.  He should have never come into the cemetery, especially on Halloween.  Mark turned around and began to walk very fast.

Mark began to run.  Whatever was behind him must have also started to run.  Mark could hear the leaves behind him.  The voice was getting closer.  "Mark!" it called out again.

Mark reached the end of the cemetery and the safety of the streetlight by his home.  But, he did not turn around to look behind him.  He ran up his sidewalk and grabbed the handle of the door.  The door was locked.  He rang the doorbell.  It took forever for his Mom to come to the door.  The porch light turned on.  His Mom peaked out to see Mark's frightened face.  She knew he had been in the cemetery.

Just as Mother opened the door. Mark ran into the safety of her arms.  Only then did Mark turn around.

There at the bottom of the steps was a little black dog.  It has his giant wad of gum stuck in its mouth.  "Mark, Mark, Mark said the dog.  It's teeth were stuck together, keeping it from saying BARK!

Dr. Mike Lockett is a storyteller and children's author who lives in Normal. Illinois.  Though his stories are often not very normal - he sometimes calls himself The Normal Storyteller.  Feel free to retell this story.  It is an adaptation of an old joke, but has been made into a tale that reinforces good values for our young.  Remember, readers, "Always listen to your Mothers!"

Please go to www.mikelockett.com for more stories or to hire Dr. Lockett to give programs for your school, library, church or other organization.