The Cat, the Rooster and the Young Mouse 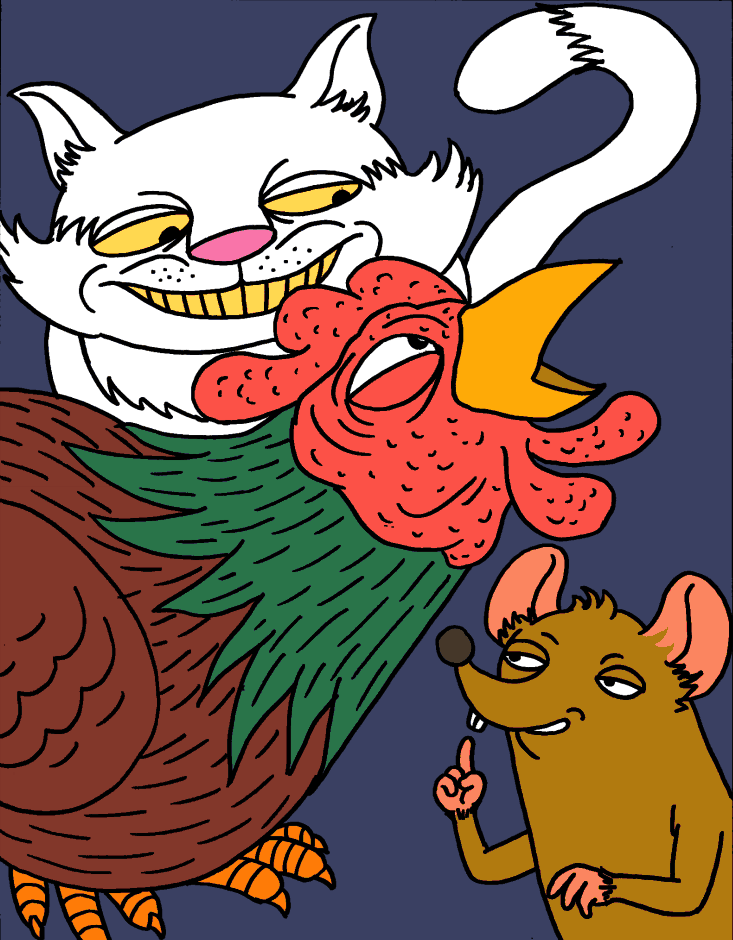 A very young mouse went out to see the world.  The world was much larger than he had ever imagined before he had left his nest to go outside.  When he came back home, he told his mother about his adventures.

"What a big world," he said.  "The animals I saw were so very different from each other.  One was really beautiful and nice.  The other was ugly and scary.  He was a monster."

"Tell me about the scary animal," said the mouse's mother.

"The scary animal was tearing up the ground with sharp claws on its feet when I saw it.  It had ugly red raw meat hanging from its neck and sitting on top of its head.  It kept flapping its arms against its sides like it wanted to beat me.  When it saw me looking at it, it pointed its sharp mouth at me like it wanted to eat me.  Then it screamed and roared at me.  I was so scared that I ran away."

"Tell me more," his mother said.

This is when his mother said, "I am glad you did not meet the beautiful animal.  Good looks are not everything.  That beautiful animal was a cat.  Cats love mice.  They love to eat them.  The animal might have looked nice, but you would not be here to talk to me if you had gotten closer."

"But, what about the monster?" asked the young mouse.

"That was no monster," answered his mother.  That was a rooster.  The rooster rules the barnyard.  He is your friend and was warning you to stay away from the cat."

"I hope you remember this all your life," said the young mouse's mother.  Never judge anyone by their looks!"

Dr. Mike Lockett is an educator, storyteller and children's author from Normal, IL. Dr. Lockett has given more than 4000 programs across the USA and as far away as eastern Asia. Contact Mike by writing to Mike@mikelockett.com in order to book him for a storytelling program or young authors program or to inquire about purchasing his books and CDs. The illustration is bu Chung Yi-Ru, Copyright 2014, owned by Mike Lockett.  More stories and information about storytelling can be found at www.mikelockett.com