The Frog in the Milk Pail 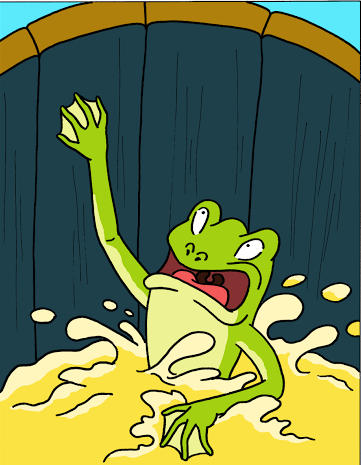 A little frog was hopping around the farmyard looking for good things to eat.  He found wonderfully juicy flies buzzing around the pig pen.  "Gulp! Gulp!" Gone.

He ate some delicious crunchy spiders that hung from webs behind the feed trough.  "Gulp! Gulp!"  Gone.

He saw a mosquito flying by and reached out with his long sticky tongue and grabbed it.  "Slurp," went his tongue. "Gulp! Gulp!"? Gone.

The pail was filled half way with fresh milk.  The level of the milk was too low for the frog to reach the top of the pail.  The sides of the pail were high, and he could not climb out.  The frog kicked, and he swam in circles until he became tired.  He tried to close his eyes just to rest for a few seconds, but he sank to the bottom of the pail where his nostrils filled with milk.  He could not breathe.

He used his legs to push off the bottom and kicked with all his might until he came to the surface again.  He was so afraid, and he was so tired.  He just wanted to rest.  But every time, he quit kicking, he sank into the milk again and started to drown.

Then, something strange happened.  The milk began to turn thicker around him.  At first, this make kicking even harder.  The thickened milk tried to suck him to the bottom of the pail.  It was harder than even to swim and to kick.  But, still the frog would not give up.

Finally, the milk turned thick enough that the frog could stand on top of it instead of sinking in.  The milk had been turned into butter through all the kicking and turning and churning of the frog.  The frog was able to climb out to safety and to return to his family.

When your life gets really tough.

When you think you've had enough

When the world works you to death

Try so hard before you rest

Keep on working, do your best

Don't give in until you're done.

Don't give up until you've won.

Dr. Mike Lockett is an educator, storyteller and children's author from Normal, IL. Dr. Lockett has given more than 4000 programs across the USA and as far away as eastern Asia. Contact Mike by writing to Mike@mikelockett.com in order to book him for a storytelling program or young authors program or to inquire about purchasing his books and CDs.  The illustration for this story is by Chung-Yi-Ru and is the Copyright of Dr. Mike Lockett, 2014.  More stories and information about storytelling can be found at www.mikelockett.com