The North Wind and the Sun 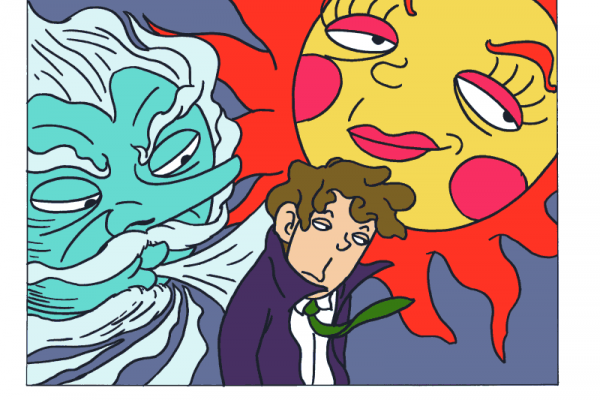 The North Wind had been busy sweeping leaves along the sidewalks with giant breaths.  He took time out to tease several little clouds by bouncing them around.  He was having fun and ready to do a little blowing and boasting, especially when he saw the Sun.  He took a deep breath, puffed up large and blew straight towards the Sun, ready to continue their ongoing dispute.

Sun smiled down on the earth, heating up the ground and melting away the morning fog.  She warmed the chilled waters in the lakes and streams and was having a wonderful morning until that annoying North Wind came blowing by.  The Sun's smile almost disappeared as she prepared for another of North Wind's bragging sessions.

The North Wind blew alongside the Sun and began to talk about how strong he was.  The Sun moved across the sky, pretending not to hear as he called her name and tried to ignore his howling.  The day would be much more pleasant if he would just go away.  But, as usual, ignoring the North Wind didn't work.  He kept coming closer and was blowing little dust clouds and sending little whirlwinds to block her path through the sky.  He knew it would only be a matter of time before she gave in and satisfied his urge to quarrel about which one was stronger.  Finally, the Sun paused  and turned to look at him.

So it was that the argument started as usual.  The North Wind stormed up close to the sun and thundered to a halt.  Instead of giving him a burning glance, the sun winked and smiled in her warm and charming way.

"Good morning," Miss Sun, whispered the North Wind.  He was trying a calmer approach this time as he began to talk.  "You are certainly looking bright today.  I don't suppose you noticed the way I blew all the litter off the city streets yesterday?  I don't know of anyone who can get quite as much done in a day as I can," he began.

"You are quite good," admitted the Sun.  "But, all of us have a place around this world where we live."  Once again, she displayed warmth in her comments.

Ignoring her attempts to be nice, the North Wind blurted out, "When are you going to admit that I am stronger than you are?"  He was ready to start the old argument again.

But, on this particular day, before the Sun could reply, she heard a whistling sound.  She looked around and saw a traveler walking along on the road below them.  The traveler was not paying attention to either the Sun or the North Wind and walked on unaware of their dispute.  His happy whistling had caught the Sun's attention.  As she looked down, she noticed that the man wore a coat, and she thought of a way to stop North Wind's bragging for all time.

"I might admit that you are stronger than me if you can beat me in a contest," said the Sun.

The North Wind's ego wouldn't let him turn down a challenge.  "I can beat you at anything," he stated.

"Let us agree," said the Sun, that whichever of us can make that man below us take off his coat is the more powerful."

"It's a bet!," replied the proud North Wind.  He could blow down trees, so he knew he could cause a man to take off his coat.  Right away, he dropped down lower in the sky.  He sent a puff of air that blew the bottom of the jacket upwards, hitting the man in the face.  The man smoothed the bottom of the coat down with his hands and kept on walking.  Annoyed, the North Wind blew harder.  With the first cold blast, the man pulled the coat more tightly around him and turned up his collar.

The harder the North Wind blew, the tighter the man held onto his coat.  The man grasped the ends of his sleeves with his fingers and from the inside of the arm holes pulled the arms of the coat closed at the wrist to keep the wind out.  Then the man wrapped his arms across his chest to keep the wind from blowing the coat open.  He tucked his chin down and leaned forward into the wind and kept walking.  The North Wind puffed and puffed until he was out of breath.  All that had happened was that the man hung onto his coat tighter than ever!

Then the Sun took her turn.  She began to shine.  At first her beams were calm and gentle.  But, after the terrible cold of the North Wind, the sunshine felt pleasant to the man.  His chin lifted, and he turned his face upwards toward the light.  The Sun warmed her rays just a bit, and watched as the man's arms dropped to his side.  She watched his hands re-appear after the man let go of the ends of his sleeves.  She turned up the temperature and saw him open his collar and unbutton the jacket.  Then, she heated the air around him, and the man took out a kerchief and mopped his brow.  Moments later, as the Sun continued to shine on him, the man took off his coat and sat down in the shade of a tree to cool himself.

The Sun didn't say a word to the North Wind.  Politely, she turned and continued her journey across the sky.  Both of them knew that her gentleness and kind persuasion were more powerful than all of the North Wind's bluster and force.

Dr. Mike Lockett is an educator, storyteller and children's author from Normal, IL. Dr. Lockett has given more than 4000 programs across the USA and as far away as eastern Asia. Contact Mike by writing to Mike@mikelockett.com in order to book him for a storytelling program or young authors program or to inquire about purchasing his books and CDs. The illustration at the top is by Chung Yi-Ru, Copyright 2014, owned by Mike Lockett.  More stories and information about storytelling can be found at www.mikelockett.com