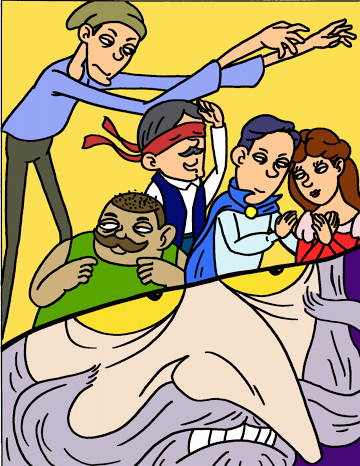 Once there was a very old King who had one son.  He told his son, "I am getting old and will some day die.  Before that time I wand to know that you are happily married and have someone to share your life."  He gave his son a golden key and said, "Go up into the castle tower and find a wife for yourself."

The prince went the tower.  He had never been in the tower and did not know what was there.  He walked in and saw twelve large frames hanging on the walls.  Eleven held pictures of beautiful women.  Each woman had a crown on her head.  Each wore a different dress.  The pictures seemed to look back at him.  Each picture was more beautiful than the one before it.  The twelfth picture was covered with a white curtain.

Under the last curtain was beautiful woman of all.  She wore a white dress and a crown of pearls on her head.  "If I have a choice, this woman will be my bride."  As he said these words, the Princess lowered her head and gave a sad look.  In that instant all the pictures disappeared.

The Prince went to his father and told him that he had chosen a wife who could make him happy.  He described the woman.  The old King looked sad.  "You have picked the only woman that is impossible for you to have.  The Princess in that picture is under the power of an evil Wizard.  She is captive in an iron castle.  All who have attempted to set her free have never returned.  If she is the one you must have, go with my blessing.  Good luck, and return home safe."

The Prince rode away in search of his bride.  He took four horses,  He rode one and rested the others.  He rode through forests and across mountains through day and through night.  But as he rode he passed by a man on foot.  The man was tall with long arms and long legs.

"My name is Long.  I can extend my arms and legs to reach things far away.  Do you see the bird's nest in that pine tree?"  Long stretched his arm and grabbed the nest at the top of the tree and handed it to the Prince.

"I am impressed," said the Prince.  "Please come with me.  Long got on one of the horses, and the two rode off.  They rode until they came to another man.  He was short and heavy with a belly that looked like a large barrel.

"My name is Broad.  I can widen myself.  Ride far away while I show you what I can do."   When the Prince and Long were far enough away, Broad took a deep breath and began to stretch out his stomach and sides.  His belly and sides grew in all directions until he looked like a mountain that had flattened itself out wide.

The Prince gave Broad a horse, and the three rode off.  As they rode, they passed another man.  This man had a bandage across his eyes.

"Who are you?" asked the Prince, "and how can you see with the bandage on your eyes?

"My name is Sharpsight.  I see perfectly with my bandaged eyes.  If I unbandage them - and gaze sharply at anything, it catches fire and bursts into flame.  He looked towards a large rock and removed the bandage.  He fixed his eyes upon it.  Flames came out of his eyes.  The rock began to crack.  Pieces flew all over.  In a very short time nothing of it remained but a heap of sand.

The Prince gave Sharpsight his last horse, and the four rode off together.  In a very short time, they reached the iron castle of the evil Wizard.  The Prince and his new friends crossed the drawbridge and entered the iron gates of the castle.  They put their horses into a stable that looked like it had been prepared for them with food and water for the animals.  Stone statues stood silently around the courtyard.  The statues looked like real men.

The prince and his new friends walked through open doors and into the castle.  The room was brightly lit, and a table was set with food and drinks for four persons.  They waited and waited.  When nobody came for a long time, they sat down and ate and drank.

Just as they finished eating, a door opened and the wizard entered the room. His long gray robe touched the floor.  His tall pointed hat bent over at the top.  His long gray beard came almost to his waist. His hand held a long rope.  The other end of the rope was tied to the hands of the beautiful princess.

"I know why you have come," said the Wizard.  "You came for the princess.  Take her, and keep her IF YOU CAN!  Watch her carefully for three days.  If she vanishes, you and your servants will be turned to stone like all who have come before you."  The princess sat down, and the Wizard disappeared.

The Prince began to talk to the Princess.  But, she remained silent as if she were a statue.  The Prince and his new friends began their job of watching the Princess.  They would not let her disappear.

Long reached out his arms and legs.  He wrapped them around the edges of the room to keep anyone from coming into the room.  Broad swelled up in the doorway to block the entrance to the room.  Sharpsight stood in the middle of the room turning around to watch for anyone coming or going.  They all tried to stay awake.  Yet they all fell asleep in the night.

The Prince was the first to wake in the morning and saw the Princess was gone.  "Oh no, he said to his friends.  The Princess is gone.  We will all be turned to stone."

"Do not fear," said Sharpsight.  I see your lady.  She is one hundred miles away inside an acorn at the top of a tree in the middle of a forest."

Long stretched out his body and took ten miles with every steps with Sharpsight guiding the way.  In seconds they picked the acorn from the tree and brought it back to the Prince.  The Prince sat the acorn on a chair, and the Princess appeared.

Just as the Princess appeared, the Wizard crashed into the room. He had not expected to see the Princess.

"Your Princess will be back for you to guard again tonight.  I doubt you will be able to watch her so well this time!  He put his hand on the shoulder of the Princess and both disappeared.

When night fell, the Wizard again came through the door with the Princess.  "Guard her if you can," he said.  "If she is gone in the morning, you will join my army of stone statues."

The Prince and his friends did all they could to stay awake.  But, the Wizard's magic made them close their eyes. For the second time the Princess vanished.  The Prince was the first to awake.  "My friends, I need your help again," said the Prince.  "Please help me find the Princess."

Sharpsight took off the bandages and stared hard at the side of the mountain.  It split open, freeing the rock.  Another look split open the stone showing the precious jewel.  Long picked up the jewel and returned to the iron castle.

The Prince placed the jewel on the chair.  The Princess appeared before him.  The door slammed open again, and the Wizard walked in.  His eyes were filled with anger.  I see you have kept good watch over the Princess once more.  Tomorrow will be a different story.  The Princess will be lost to you, and you will become part of my stone army."  He placed his hand on her shoulder, and the two were gone again.

The day passed quickly again.  As the sun fell, the Wizard brought the Princess in again.  "Enjoy your last night alive. You will NOT be able to guard the Princess tonight.  Then you WILL be turned to stone."  One more time magic caused the four friends to fall asleep, and the Princess disappeared.

Broad said, "Long must take me with him and with Sharpsight."  Long put one man on each shoulder and stretched out his arms and legs once more.  Long took long steps as he did before.  But the shell was in water too deep to reach.

Broad said, "Let me do my part to help.  He laid down on his stomach by the edge of the sea and swelled up large.  He began to drink from the sea.  He drank and drank,  In only moments, the level of the water dropped enough to allow Long to walk out and stretch his arm into the sea.  He opened the shell and found the ring.  The three started back to the iron castle.  However, all the water made Broad so heavy that Long dropped him.  Broad hit the ground and water filled the valley where they walked.  The three barely made it out of the flood.

Meanwhile the Prince was in great trouble at the castle.  The sun began to rise, and his servants had not returned.  "Ha!" said the Wizard as he stomped into the room.  He did not see the Princess and raised his wand to turn the Prince and his friends into stone.  The Prince saw what was happening and called out to Long.  Long stretched out his arm and placed the ring on the chair just in time.  The Princess appeared and stood in front of the Wizard.

The Wizard groaned and turned into a Raven and flew out the window.

The beautiful Princess looked at the Prince and thanked him and his friends.  She thanked the Prince and kissed him for the first time.  As she kissed the Prince every stone figure came back to life.  The Prince proposed to the Princes.  She accepted, of course, and a royal wedding soon followed.

The old King was thrilled to see his son happily married.  He honored the three friends, Long, Broad and Sharpsight for their service.  And everyone in the kingdom lived in happiness for many years.