Anansi and the Python 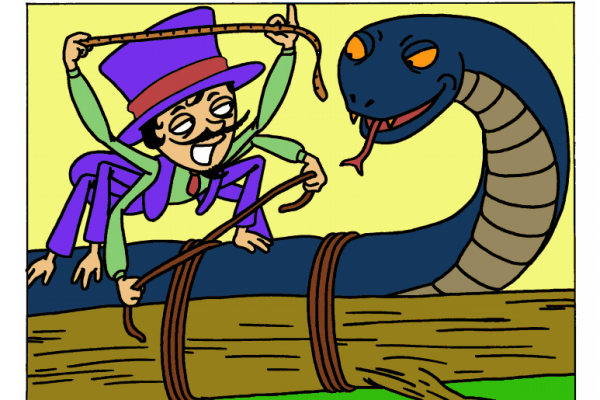 Anansi stepped off the cruise ship and took off his party hat and held it in his hands.  "Where's the party?" he shouted.  Then he listened for the sound of calypso and regae music.  What he heard was silence.  Anansi sniffed the air and licked his lips expecting to smell aromas of tropical foods in the air.  But no foods were cooking.

"Where's the party?" shouted Anansi.  "Where are the bright colors?  Where are the happy people?  I brought my party hat and want to eat and sing and dance."  He had been to this island in the Caribbean many times before and always had a good time.  Now the island was quiet.  The people were dressed in dark clothing.  No singing or music could be heard.  No smells of food were in the air,

Usually the people loved to see Anansi.  He sometimes was called Anansi the Spider - when he chose to appear in the form of a spider, and sometimes just called Anansi when he appeared as a man.  He was known for his quick wit and his fun stories.  Right now, the people were pressing their fingers to their lips and telling him to shhhh.  Spider or man, they wanted him quiet!

"What's wrong with everyone?" asked Anansi.  "I came to party, and you all keep telling me to 'Shhhh'."

"It's the snake," one islander finally whispered as he looked with fear towards the Jungle.  "In the middle of the jungle lives a giant Snake, a python!  It is larger than any Snake we have ever seen.  It ate most of the the jungle animals.  It also ate most of our cows and the pigs." (This explains why there were so few cows and pigs on that Caribbean island)  "The python also eats any people who come to close to where he lives by the river."

"If we cook our island foods, the snake smells it and comes to eat.  If we play music or sing and play Calypso and Reggae, the Snake hears and comes to the party.  If we dress in our bright clothes, he sees us and comes to  eat us.  We are afraid.  There will be no parties on the island until the Snake is gone!"

Anansi saw everyone's head bobbing up and down sadly.  "Where is this snake?" asked Anansi.  "I will kill the Snake!"

"Oh, no!," whispered another.  "We called upon the sky God to save us from the snake."  He told us to use our wits, but that we could not kill the python.

"I made python," said the sky God.  "I can't unmake him.  Nor will I kill him, but if anyone can stop him from his murderous ways, I will reward them with a present."

"If we kill the Snake," said the people, "the sky god will send the 'hurricane' to blow across our island."  The villagers threw up their hands. "Who is clever enough to destroy the Snake? Who is brave enough or stupid enough to try."

This was when Anansi the Spider realized the Sky God had promised a PRESENT for stopping the snake from killing.  Any present from the sky god would be an outrageously fantastic present.  Besides, the Snake was keeping him from having a party.

Anansi told the villagers to bring him two apples, two eggs, fresh warm bread, and a long rope. Then he told them to cut down a tall tree and strip off the branches and carry it down by the river.  The villagers worked very fast because they didn't want to be near the river near the home of the Snake.   But the giant Python lay sleeping while Anansi crawled up by the snake's hole.  He started a conversation with no one to listen to him except himself and the Snake. "No, no! "He said out loud to himself.  "You are wrong about the snake," Anansi loudly shouted.  He is nice. He won't hurt me.  Especially when he sees the presents I have brought to him."

Then Anansi quickly walked to the other side of the hole and pretended to be a villager once more!  "But the snake is EVIL!  He eats our cows and people and scares us to death."

Anansi moved back quietly to the first side of the hole again and said, "I won't let you talk about the snake that way.  Take that" - and he hit a stick on the ground and yelled in pain.  "Take that you liar!" and Anansi slapped a stick noisily on the mud before continuing.

"Even if the Snake eats things, he is the biggest snake in the world, and I want to meet him. You go away!"   All these praises about the Python kept flowing from Anansi's mouth until the Snake came out of his hole.

But, the only one he saw was Anansi.  This was no surprise to the snake - for snakes cannot see very far and hunt their food by smell and by the vibrations their prey makes when it moves.  Anansi said to the snake, "I taught that villager a lesson - He ran off!  He will not insult you again!"   Anansi  then held out the loaves of warm bread

Thinking the loaves were Anansi's arms, the python flicked it's tongue and touched them to taste them.  The snake's head came out of the hole more, and Anansi let go of the loaves just as the snake grabbed them with his fangs. Then, Anansi rolled the fruit farther out past the entrance to the hole.  Feeling the vibrations - the snake came out further yet and swallowed up the fruit.  Then Anansi presented python with the eggs.  Now everyone knows that snakes like to eat eggs.  And the snake unhinged his jaws and swallowed the eggs.

Then the Snake looked at Anansi and thought ... dessert!

"I am honored to meet you face to face," said Anansi. He was less afraid since he knew the Snake had already eaten something and was less hungry than before.

"Most creatures do not live long after they are so honored," hissed the Snake.  "But you seem different than the others and more intelligent."

"But," continued Anansi, "I tell them you are long enough to coil around a house or a village."  Then Anansi paused, "Exactly how long are you, Mr. Snake?  I can't see your whole body."

Python came farther out of his hole.  He was huge, but Anansi hid his fear.  "You are huge - but come out so I can measure you and prove you are the biggest snake in the world."

Python crawled out of his hole inch after inch and foot after foot.

"Can you see this log?" asked Anansi, patting his hand on the bare wood.  If you lie down beside it I can measure you."

Well, the snake didn't like people saying he was smaller than, so he slithered over next to the log.

"Now," Anansi said - "If I tie a piece of rope around you every ten paces - I can count up the ropes and see how long you are and prove you are the biggest Snake in the world." This sounded reasonable to the Python, and he let Anansi begin to tie his tail to the log.

"Say," said python after turning his head and staring straight into Anansi's eyes, "Your knots are really tight."

"I can loosen them if you wish," said Anansi, "if you don't want to stretch to your longest and prove you are truly the longest Snake in the world."

"Oh, no!" said Python.  "Make them tighter yet!. But hurry up. This is uncomfortable."  Then Python closed his eyes thinking about how delicious Anansi would be to eat when he was done!

Anansi finished tying the snake to the log.  Then he asked, "Can you move and stretch further?"

"That's what I've been waiting for!" shouted Anansi.  IT'S PARTY TIME!!!  Then he put on his party hat and began dancing around.

"Truly you might be the biggest Snake in the world, but your brain is small. I have you tied up and you can't eat anyone or anything on this island."  Since he knew Sky God didn't want Python killed, he pushed the log that held the snake right into the Carribean Sea where he floated to South America.

"Sky God, Did you see that?" asked Anansi. I stopped the Snake's evil ways without killing him. That's when Sky God gave Anansi a present. He gave him a small box with enough wisdom and cleverness for a lifetime. This cleverness made Anansi famous throughout the world.

The people put on their brightly colored clothing.  They cooked their finest meals and let the smoke fill the air with magnificent scents.  They sang and played Calypso and Regae music and told wonderful stories.  If you go to the Caribbean today, you may still hear some of the wonderful stories about Anansi and the Python.

And the Python? ... He still lives in the rainforests of South America. And some people today are still trying to find him so they can say they have measured the longest snake in the world.

Dr. Mike Lockett is an educator, storyteller and children's author from Normal, IL. Dr. Lockett has given more than 4000 programs across the USA and as far away as eastern Asia. Contact Mike by writing to Mike@mikelockett.com in order to book him for a storytelling program or young authors program or to inquire about purchasing his books and CDs. The illustration at the top is by Chung Yi-Ru - Copyright 201, owned by Mike Lockett.  More stories and information about storytelling can be found at www.mikelockett.com