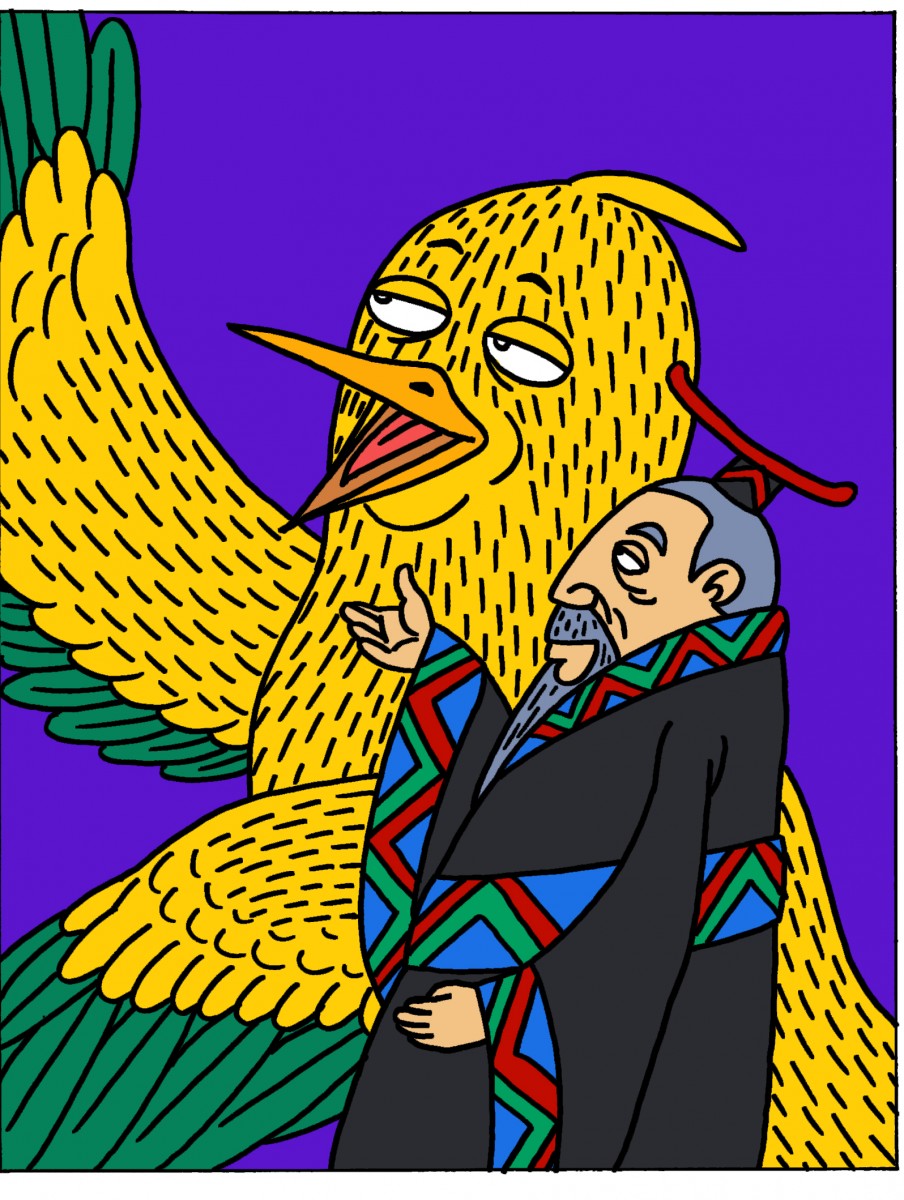 Many years ago a great and kind emperor lived in ancient China.  He had the most beautiful palace in the world.  At least that is what the people in China believed.  High walls surrounded the palace.  Inside and outside of the walls, there were beautiful gardens that were tended by the servants.

A deep, dark forest surrounded the outer gardens.  In this forest,there lived a nightingale.  The nightingale sang happily each day and made the most beautiful music of any creature in the forest.  The gardeners who worked outside the palace walls talked every day about the sweet songs they heard as they worked.  They told the other servants who frequently walked to the woods to hear the beautiful music when they weren't working.

"Dear Nightingale," said the Lord Chamberlain, "I have been sent by the Emperor to find you.  He wishes to hear your beautiful music."

"I am honored that the Emperor would like to hear me sing," said the Nightingale.  "Please tell the Emperor for me that when he comes to the forest, I will prepare a special concert for him."

"The Emperor does not leave the palace," said the lord.  "He asks that you come to the palace to sing for him there."

"Why should I go to the palace?" asked the Nightingale.  "I am happy to be right here in my woods."

"You would make my Lord - the Emperor - happy if you would please come and sing for him."

At the end of his concert, the Nightingale said, "I am glad that you enjoyed my music.  Now I must go back to my home in the woods."

"You may not go," said the Emperor.  "You must stay in the palace and be my Court Singer."  At this, the Lord Chamberlain caught the Nightingale and put it into a cage.

The Emperor missed the singing and demanded that the Lord Chamberlain find a replacement for the bird.  No one could tell the Emperor that he was acting like a spoiled child, for the people believed that the Emperor could do no wrong.

The Lord Chamberlain had craftsmen make make a toy bird for the Emperor to make the Emperor happy.  The toy bird just was not the same as the Nightingale.  It had to be wound up, or it would not sing.  Plus, the sound was loud and shrill instead of soft and sweet like the music of the Nightingale.

Everyone talked about the Emperor's illness.  Even the birds of the forest heard about it.

"I must go back to the palace," said the Nightingale.

"He will put you in a cage again," said the other birds.

"That will not matter if I can make the Emperor happy," said the Nightingale.

All the servants seem so sad that their Emperor was sick.  The Nightingale flew out of the forest, over the palace walls, threw the inner gardens and into an open window palace.  He flew through the palace until he came to the Emperor's bedroom.  It lit on the bedpost and began to sing.  What sweet music from such a tiny bird.

The Emperor opened his eyes in amazement.  He thought he had been dreaming until the Nightingale sang again.  At that moment, the Emperor started to regain his health.

"Thank you little Nightingale.  You have given me a gift with your music.  I feel better already."

"I will stay if you like said the Nightingale," though he did not know how he could sing if he was to be caged.

"No, I am the one to be caged," said the Emperor. "It is expected by my people that I will always be able to be seen in my palace.  Your music made me feel like I was free and able to enjoy the outside world like I did before I became Emperor.  But, I cannot cage you again.  You must be free so you can sing for everyone's enjoyment."

The Emperor ordered the Lord Chamberlain to open the bedroom window so the bird could leave.  "Take your freedom," said the Emperor. "But, please come back and sing for me again.  Now that I have heard your beautiful music, I cannot live without hearing it again."

Thus it was that every night afterwards, the Nightingale would leave the forest, fly over the outer gardens, over the palace walls, through the inner gardens and into the Emperor's window.  The Emperor never again tried to cage the Nightingale.  He realized that the bird needed his freedom if he was to be able to creative and make beautiful music.

The Emperor would lie in his bed and listen to the beautiful music.  But, before going to sleep, he always made certain his servants opened the window, so the bird could fly out and go back to his home.