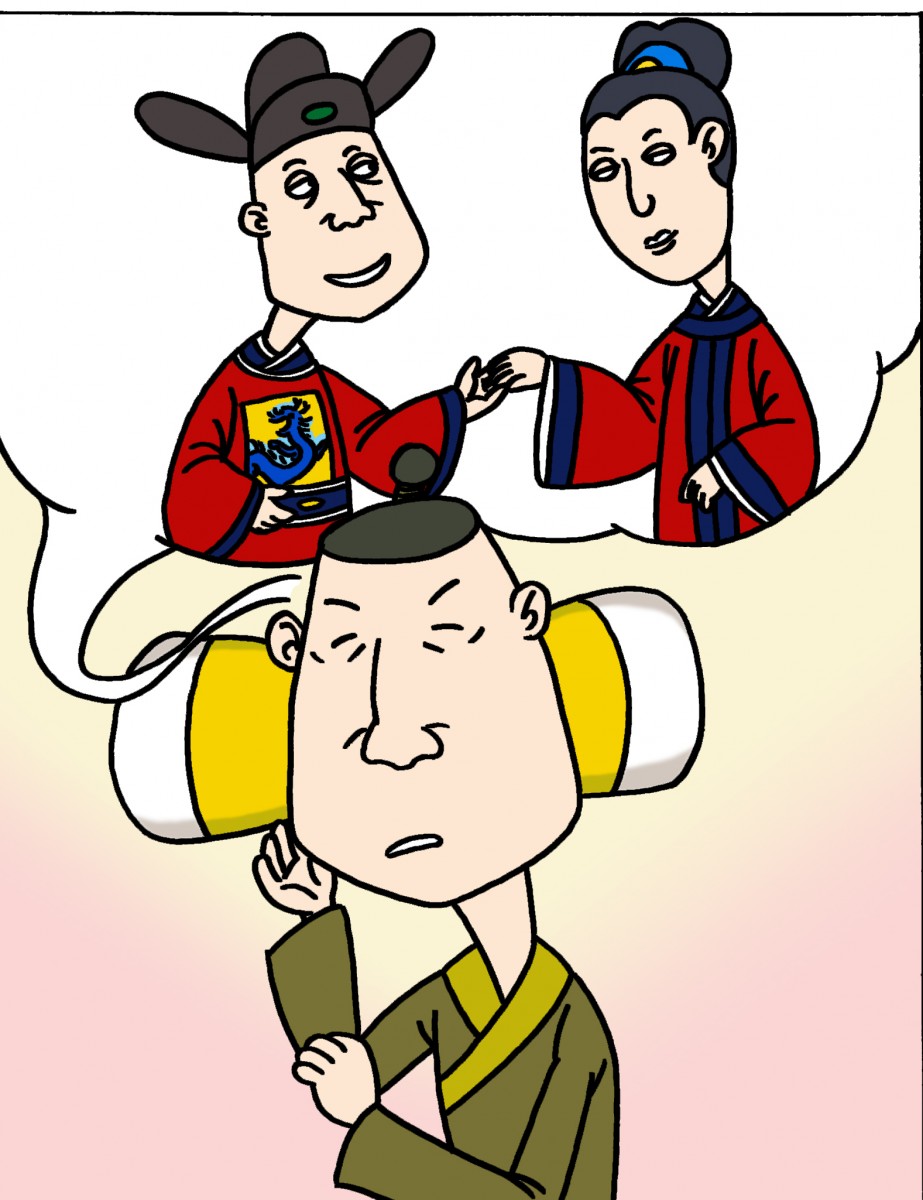 One day long ago, a Buddhist priest on a pilgrimage stopped by a roadside inn to rest.  He spread his mat out on the floor to sit and placed a clay bowl for alms by his side.  A young man walked past the priest and stopped to place a coin into the priest's bowl.

"It is funny," said the young man.  "It is funny that a poor, unhappy farmer like me should give alms to a rich, contented priest like you."

"You seem well fed and healthy enough," said the priest.  "How can you be unhappy?"

"What pleasure can I find?" asked the young man.  "I till the land each day as a simple farmer.  I wish to be someone important, not just a lowly farmer."  The young man sighed.  "I wish to be a great warrior, a great general... or a rich man with fine food and expensive clothes.  Or, I'd like to have a position of importance at the emperor's court.  I wish to be great and important."

As the young man talked, he became sleepy.  He sat down on the priest's mat.  Then, he leaned over and laid on the ground and went to sleep.  The priest placed a pillow under the man's head.  "Your kind gift to a disciple of Buddha will be rewarded," the priest said.  "As you lay upon this pillow, your wishes will be granted."

The young man was surprised when he opened his eyes.  He found himself in his own home.  Not long afterward, he married a beautiful girl.  With her help, he began to make more money than ever on his farm.  He used the extra money to buy more land and to hire laborers to help him.  In time, he became wealthy.  He used his extra time to study.  Soon, he was made a magistrate and began to rule over others.  Eventually he was called to work at the court of the emperor.  He was an important man.

Then, bad things began to happen.  He was falsely accused of treason.  He was blamed for the mistakes of others and sentenced to be executed.  His friends and his wife deserted him.  How terrible and alone he felt.  "I wish I were a simple farmer once again," he thought as he kneeled before the execution block.  His neck was on the block, and his head hung over a stained basket.  The executioner raised sword.

The farmer opened his eyes... and... there he sat, in front of the priest he had given the coin to.  He was young again.  He was no longer dressed in the clothing of a rich man.  He was dressed as a simple farmer.  He was no longer kneeling before the executioner's block.  He looked up... there was no sword above his head.  He only saw the smiling priest and the inn that was close to his home.

"Thank you, kind priest," said the young man.  "You have taught me a good lesson with the use of your magic pillow.  I learned what it is like to be great and important, and I no longer desire it."  Then, the young man smiled one more time and left the priest.  He returned happily to the simple life of being a farmer.