Monkey and Rabbit Together 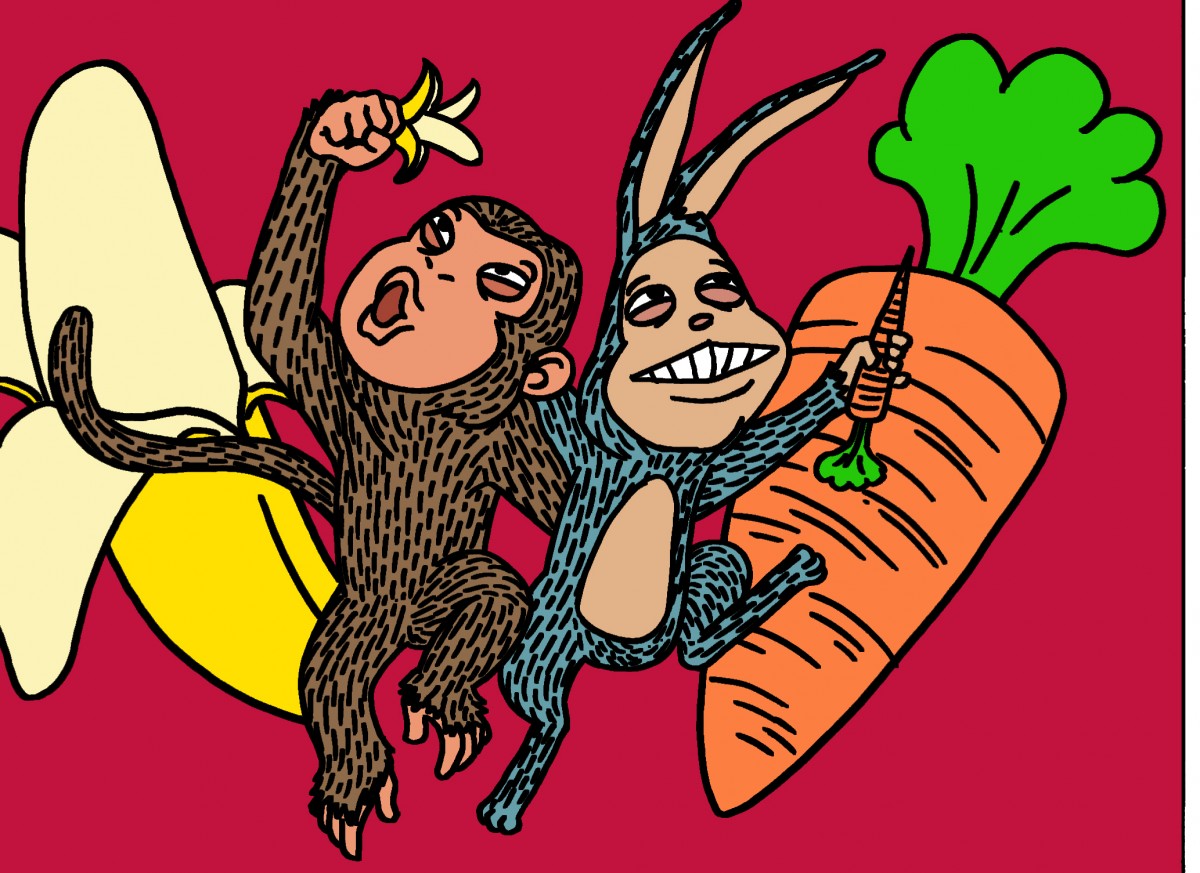 Monkey and Rabbit were friends.  They often got together just to talk.  They liked talking to each other and their friendship was almost perfect except for two small problems.

Rabbit ran all over the prairie.  He knew what was happening in every den and every hole and in every clump of grass.  He was always glad to share the news with his friend, Monkey.  Like Monkey, Rabbit told good stories.  But also like Monkey, Rabbit had an annoying habit.  He always twitched and moved while he talked.  He could not sit still.  Rabbit was always flopping his ears all over.  He kept turning his head around to look behind him.  First he'd look one way.  Then he'd look the other, and he'd always scrunch and wiggle his nose smelling the air when he talked.  All of his wiggling was the second problem.  Monkey had trouble looking at Rabbit while he talked to him.

One day as they talked, Monkey finally said, "Please stop that!"

""Stop all that looking around and sniffing the air," added Monkey.  "You keep flopping your ears around and looking back and forth.  You are making me nervous with your bad habit!"

"I can sit still any time I want," said Monkey.

Neither animal moved.  Monkey began to get nervous.  His fingers wiggled in place.  He wanted to scratch his head.  His stomach itched.  His belly itched.  Even his arms itched.  But he did not move.

Rabbit sat still.  He wanted to wiggle his nose and sniff the air to see if he could smell any danger in the air.  Rabbit wanted to look around and see if any wild animals were hunting for food.  But Rabbit did not sniff.  He did not twitch.  He did not move.

Finally Rabbit said, "Monkey, I have an idea.  As long as we are sitting still getting rid of our bad habits, let's tell each other stories to make the day go faster."

Rabbit said, "I was running through the grass on the way to see you the other day when I thought I smelled a lion in the grass.  So I stopped where I was, and I looked to my left.  I looked to my right.  I sniffed the air to see if I could smell a lion.  Then I flopped my ears and listened.  But, there was no lion there.  So I continued on my way to the river where I met you so we could talk."  Then he sat still once more.

Monkey had seen Rabbit twitch and sniff and wiggle while he told the story and decided to tell a story of his own.

Monkey said, "Yesterday on my way to the river bank I saw some villagers.  They thought I had been taking food from their fields.  So they threw stones at me.  One hit me here."  As he said this, Rabbit saw him touch his head and scratch it.  "Another hit me here, and here and here and here!  Each place he touched, he gave a hurried scratch."  When he was done scratching Monkey said, "After I felt all over to make certain I was not hurt, I came straight here to be with you."

Rabbit began to smile, and so did Monley.  Then they both began to laugh.  Rabbit knew what Monkey was doing, and Monkey knew what Rabbit was doing.

"You lose the contest," said Rabbit.  "You scratched all through your story."

"You sniffed and twitched and flopped all through yours," said Monkey.

"I guess neither of us can be still all day," said Rabbit.  "Twitching and sniffing and flopping is what we rabbits do."

"Scratching is what we monkeys do," said Monkey.  "And if we want to stay friends, I guess we had better get used to each other's bad habits.

And that's just what they did.  Then they both scratched, twitched and sniffed together at the same time.

Look for Dr. Mike Lockett's award-winning book of Monkey and Rabbit Together at http://www.mikelockett.com/merch.php