The Lion's Minister of State 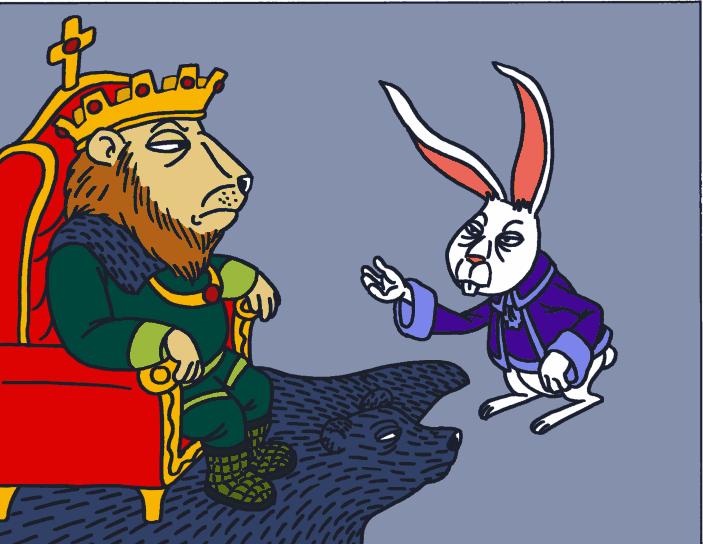 You all have heard that the Lion is the King of the Jungle.

You may not have heard that the Lion is looking for a new Minister of State.

The previous Minister suddenly disappeared.  The animals thought they knew why - especially since the Lion had recently gained weight.

Only three animals in the kingdom dared to apply for the job.

There was the Crocodile – long and green with snapping jaws.

There was the Bear - tall and brown with steel-like claws.

And the Little Bunny Rabbit, who always followed the jungle laws.

The Lion called them all to a job interview.  "As with most Civil Service Jobs - There is a test you must pass to get this job," said the Lion.

"It's too late to back out now. To be fair, I am asking you all the same question."

"Crocodile, Come here, Crocodile," said the Lion. "You first, Crocodile.  Smell my breath.  The Lion leaned forward and breathed into the face of the crocodile.  "Haaagh..."

"Is it SWEET, like the smell of flowers opening up on the Savanna in the early morning? Or is it FOUL like the stench of rotting meat under the noon day sun?"

The Crocodile was used to having his own way and telling things exactly as they were. He didn't let anyone get the best of him. So he said,

"Oh, your Majesty, if you please -

Your breath would fell a hundred trees.

It would bring an elephant to his knees!

I'd rather stuff my nose with bees.

Than smell your stinking breath..."

Then the Lion said, "Wrong answer, Crocodile. HOW DARE YOU, Crocodile. I can't hire you as my Minister of State. You would insult everybody. Your brutal insults would cause everyone to become an enemy and to make war on our kingdom."

Then the Lion fell upon the Crocodile and ate him, "ROAR!!"

The Lion grew calm once more, "Bear, your turn, Bear. Come here, Bear," said the Lion. "Take my test, Bear. Smell my breath, Bear!  The Lion leaned towards the face of bear and breathed right into the Bear's face. "Haaagh!"

"Is my breath sweet like the sweet jungle orchids growing in the top of the trees? Or is it FOUL, like the smell of dead and rotting fish floating in a stagnant jungle pool?"

Now the Bear had seen what had happened to the Crocodile. And even though he knew the Lion's breath was terrible, he decided to lie.

"Oh your Majesty, what a treat
To smell your breath, it smells so sweet.
Like fine dessert that tastes so sweet,
Your breath... Oh, I can't lie any longer.
Your breath stinks!"

Then the Lion said, "Wrong answer, Bear.  HOW DARE YOU, Bear? Everyone would hear your sickeningly sweet lies and know you are afraid. Everyone would think we are weak and attack our kingdom."

The Lion fell upon the Bear and ate him. Then he looked at the Rabbit.

"Is it sweet like the flowers dripping pollen to be made into honey by the bees? Or is it FOUL, like the stench of rotting meat on the vulture's beak?"

Bunny had seen what had happened to both the Crocodile AND to the Bear. He wrinkled up his nose in the air and started wriggling it.

"Oh, your highness, I do trust,
An honest answer is a must.
But, before my answer can be told
I must state, I have a cold...."

"Yes, that's it... I have a cold, he said - beginning to wiggle his nose up and down.  I'm sorry, your Majesty," said the Bunny Rabbit. "I have a cold. Perhaps your majesty could advise me and give me a clue as to what your opinion is. Then I'll be glad to answer."

Now, today most of you have all seen the Little Bunny Rabbit hopping around doing the work as the Lion’s Minister of State. But every time it stops, it remembers to put its nose in the air and wriggle it - pretending to still have a cold.

Dr. Mike Lockett is an educator, storyteller and children's author from Normal, IL. Dr. Lockett has given more than 4000 programs across the USA and as far away as eastern Asia. Contact Mike by writing to Mike@mikelockett.com in order to book him for a storytelling program or young authors program or to inquire about purchasing his books and CDs. The illustration was created by Chung Yi-Ru, copyright 2014, owed by Mike Lockett.  More stories and information about storytelling can be found at www.mikelockett.com