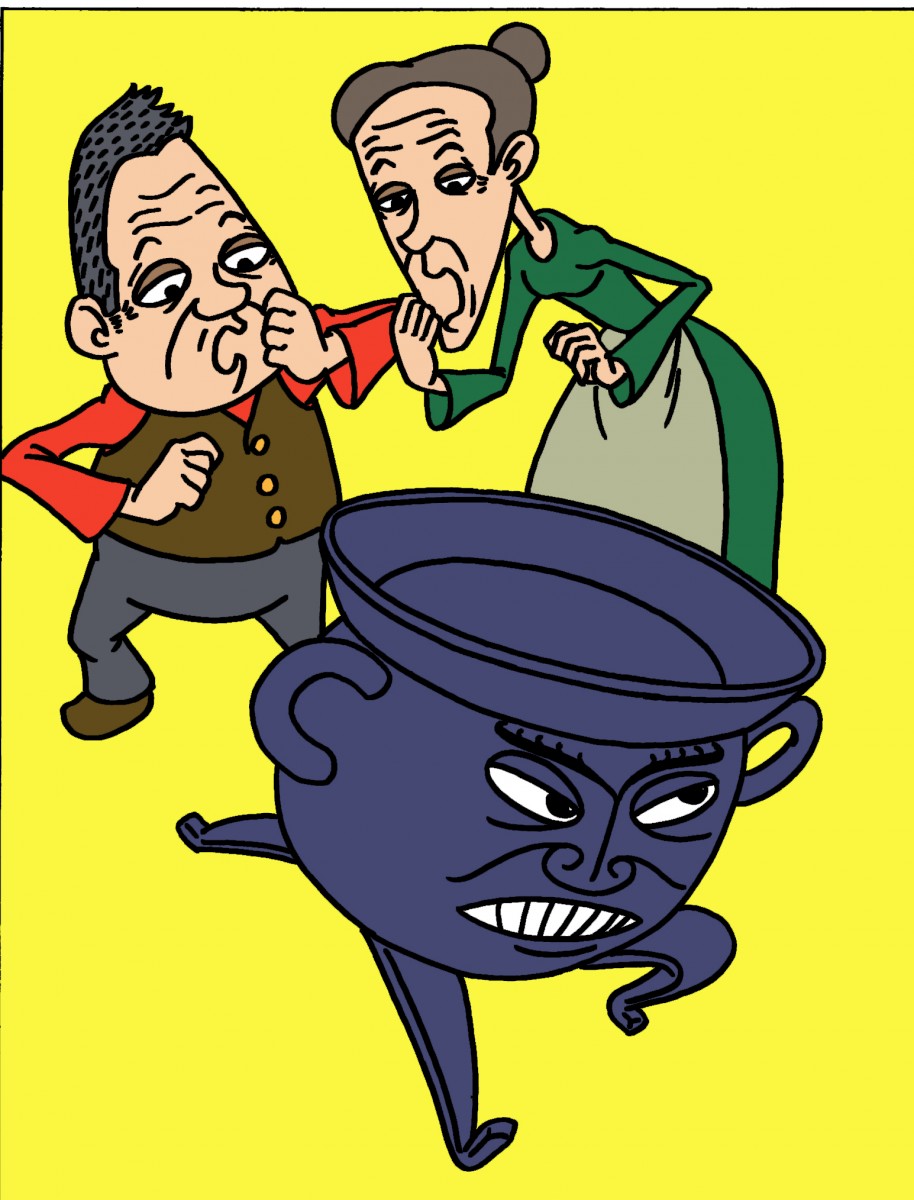 Once upon a time a man, his wife and their children lived in a very small cottage.  The couple worked hard and lived a very simple life.  They had a horse to help them farm.  They had chickens for fresh eggs.  They had a single cow that gave them just enough milk for their children to drink and a little cream to churn into butter.  They grew just enough wheat to make bread on which to put the butter. Despite being poor, they all were still happy.  Then something happened that changed everything.

A rich and powerful man took away everyone's land.  He charged them rent to stay in their own homes, and the rent was high!  He liked being rich and wanted to be richer.

The man and his wife had sold almost everything they owned to keep from being thrown out of their home.  They sold their chickens and their horse.  Now they had to sell the cow to keep a roof over their heads.

The man tied a rope to the cow and led her down the road.  "Are you planning to sell the cow?" asked a stranger by the side of the road.

"Yes," said the man.  "How much will you pay me for it?  I need money to pay our rent and to buy food for my family."

The farmer looked at the iron pot.  It had three legs.  It was all dirty.  It did NOT look wonderful.  As he stood there the pot spoke up.  "Buy me," said the pot.  "You will have everything you need."

"This pot can talk.  It must be wonderful," said the farmer.  The trade was made, and he took the pot home.

"How much money did you get for our cow," asked his wife.  "Did you get enough to pay the rent and to feed our family?"  She looked at the pot.

"I traded our cow for this wonderful pot," her husband said.

"Have you lost your mind?" asked his wife.  "That three-legged pot is old.  We do not even have food to put into the pot to cook.  What shall we do?"

"Clean me and put me on the fire," said the pot.  "You will have everything you need."

"The pot can talk.  Maybe it IS wonderful."  She cleaned the pot right away.  Then she put it on the fire.

"Where do you run?" asked the woman.

"I run to fill your stomachs," said the pot.  Then it ran out of the fireplace to the door and up the road before the woman could stop it.  It ran faster on its three short legs than she could run on her two long ones.  The pot ran into the rich man's home and stopped next to the fireplace.

"How nice, my husband must have bought me a new pot.  I will use it to bake a special pudding!" said the rich man's wife.  "I will make a rich pudding for our rich family."

The rich man's wife filled the pot with flour, sugar, butter, raisins, spices, almonds and so on to bake a rich pudding.  Just when the pudding was stirred and ready to bake, the pot, said, "I run, I run."  It ran out the door and ran down the road.  It passed walkers and people pushing carts as it ran.

The next day the pot again said, "Clean me and put me on the fire."  The husband and his wife cleaned and scrubbed the pot until it shined.  They put it on the fire.  "I run, I run!" said the pot.

"Where do you run?" asked the man and woman together.

"I run to to fill your barn," said the pot.  Then it ran out of the house and down the road.  It ran to the barn of the rich man who had made life hard for the couple.  It sat down in the doorway.

The pot ran down the road, leaving the men behind.  The pot ran to the poor family's home and into their barn.  The man was surprised and called to his wife.  They began emptying the pot.  Soon their barn was filled with enough wheat to feed them for a year.  There was enough wheat left over to share with all their poor neighbors.  What a wonderful pot!

The next day, the pot said, "Clean me and put me on the fire."  The man and his wife ran to the pot and scrubbed and scrubbed until the pot shined.  When the pot began to get warm it said, "I run, I run!"

"Where do you run?" they asked together.

"How nice, my wife must have bought me a new pot to count my money in," said the rich man.  He began to count all the money that he had made in the last month.  He filled the pot with the money as he counted it.  Then the rich man opened the door to leave the counting house.

"I run, I run!" said the pot.  It ran past the rich man, down the road.  It ran so fast on its three legs that the man could not catch it.

The next day the pot said, "Clean me and put me on the fire."  The man and his wife scrubbed and scrubbed until the pot shined.  They put it on the fire.

"Where do you run?" they asked.

"I run for justice and to solve your problems forever," said the pot.  The man and woman had no idea what that meant.  They watched as the pot ran down the road.

The pot kept running down the road.  The poor people saw it run past their door.  It did not stop running.  "I carry away your troubles," shouted the pot as it ran past.  They did not know how far it ran.  Maybe it ran to the North Pole.

The family was no longer poor.  They got their land back.  They bought their animals back.  They had money to cloth their children and send them to school.  And they all lived happily ever after.