The Frog Prince - or - A Promise is a Promise 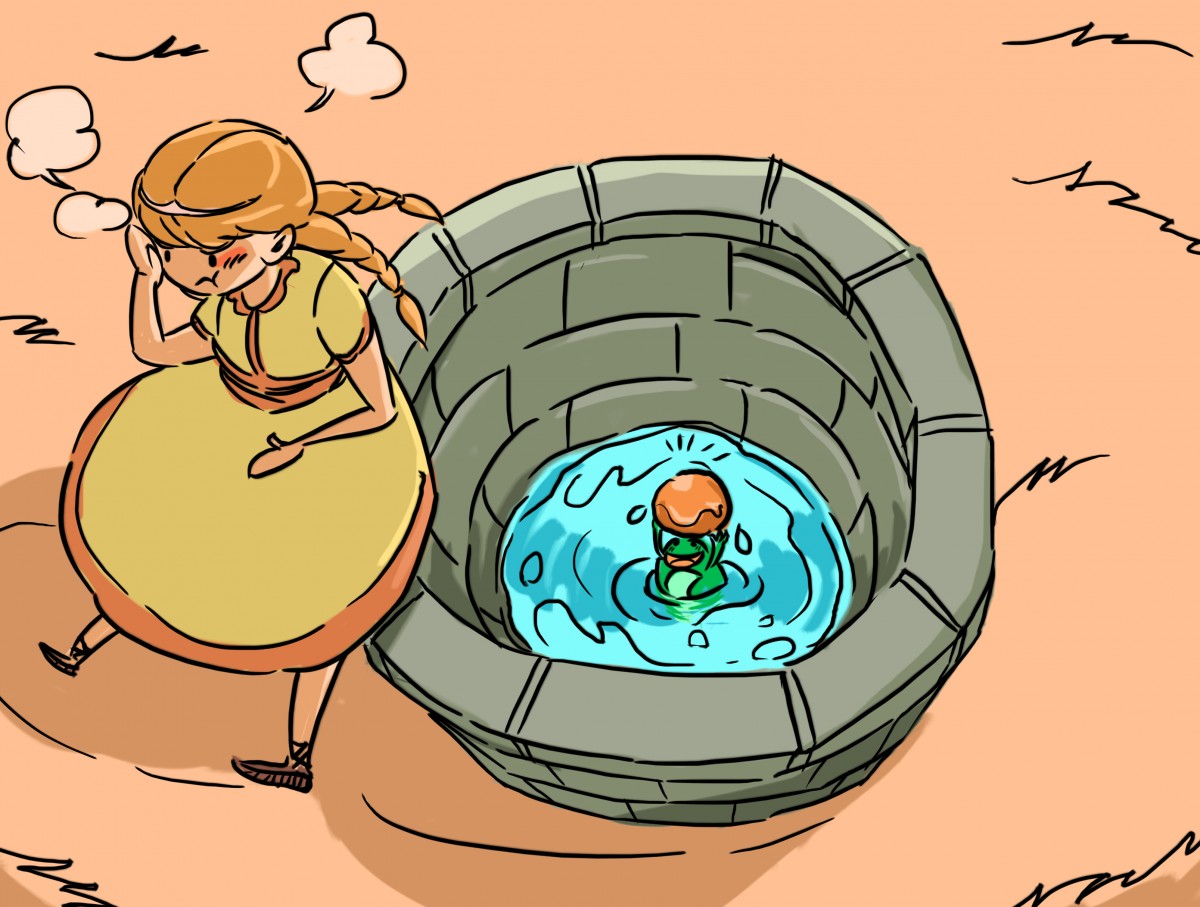 Once upon a time there lived a lovely princess.  She lived inside a great palace that had many gardens and fountains.  The princess liked to walk through the gardens and look at the plants.  She liked to look into the fountains and see her own reflection.  She was not always nice.  Because of this, she no one to play with.  When she played outside, her favorite toy was a golden ball.  She threw it high into the air and caught it time after time.

One day as she played, the princess dropped her golden ball into the well.  She looked into the well and could only see her reflection.  She could not see the ball and began to cry!

"Princess, why do you cry?" asked a gentle voice.

The princess looked around, but she could see no one.  "Who spoke to me?" she asked.  Then, she looked down and saw a frog by her feet.  "Yuck! she said, "a nasty old frog.

"I dropped my ball into the well," said the princess.  "I will give you my pearls and jewels if you can get it for me."

"I can get your ball," replied the frog.  "But, I do not want your pearls and jewels.  I want to come into your house.  I want to eat at the table with you and eat from your fine gold plate.  I want to sleep upon your bed.  And, then I want a kiss."

The princess made a face!

"Yes," repeated the frog.  "I want you to kiss me.  Promise me these things, and I will get your golden ball for you."

"Very well," said the princess.  "I promise."  She never thought he'd be able to get out of the well once he jumped in, so she would not have to keep her promises.  But, maybe he could get her ball."

The frog dove into the well, and in only a few minutes he came up with her ball in his mouth and tossed it out of the well onto the dry ground.

The princess was so happy to have her ball that she ran to pick it up and ran into the palace.

"Hey," called the frog.  "Remember your promise!"  But, the princess pretended not to hear a word.  She did not intend to keep any promises to a frog!

The very next day as the princess sat down to dinner, there was a knock at the door.  At first, it was a light tapping and only the Princess could hear it.  Then the servants heard it.  Soon the tapping grew so loud that even the King could hear it.

"What is that about a promise?" asked the King.  "We always must keep our promises!  Did you make a promise to a frog?" the King asked his daughter.

"Daddy," said the girl.  "My ball fell into the pond.  I only made the promise to get my golden ball back.  That is a nasty old frog.  Promises do not count when you make them to frogs!"

"First," said the frog, "I am not nasty.  Second, once again I remind you that I am not old.  Third, a promise is a promise, no matter who you make it to."

The King said to his daughter, "The frog is correct.  A promise is a promise, no matter who it is made to.  Invite the frog into the palace.  Keep your word."

The princess did as her father asked.  She opened the palace door, and the frog hopped inside.

"Thank you," said the frog.  That was the first promise you made.  You said I could come inside the palace, and I am here."  Then the frog hopped its way into the dining room.  "Please lift me up to the table," croaked the frog.

The princess almost said no, but saw her father watching her.  She picked the frog up and placed him on the chair next to her.

"Tha is two promises kept," said the frog.  Now, please push your golden plate closer to me so that I may eat out of it."

"Ucky," said the princess, but moved the plate towards the frog when she saw her father staring at her.

The frog ate as much as he could from the plate and said, "Please take me to your room so that I may sleep on your bed."

"In my bed?" asked the princess.  But, she knew better than to argue.  She made a promise.  She was the daughter of a King, and though she was spoiled, she knew she had to keep her promise.  She turned up her nose as she picked up the frog.  She placed the frog on a red velvet pillow and carried it up the stairs.  She laid the pillow on the bed and sat down on a chair to see what the frog would do.  She watched as the frog closed its eyes and went to sleep.  Ick!  A frog in her bed!  She slept the whole night in a chair.

When the first light of morning came through the window, the frog hopped off the bed, out of the room, down the stairs and out of the palace.  "Thank goodness thought the princess.  Now I won't have to kiss a frog!"

But, the next night, the frog returned to the palace.

The behavior of the first night was repeated this night and a third night.  Three nights, the princess let the frog into the palace, sat with it at the dinner table, let it eat off her golden plate and let it sleep in her bed while she slept in a chair.  At least she had not had to keep her promise to kiss the frog.

But, on the third night, the princess dreamed a strange dream.  She dreamed that the frog was talking to her.  In her dream she heard him say that he was really a prince.  He had been turned into a frog by a wicked fairy.  Only if he slept on the bed of a princess for three nights and was kissed by her would he ever turn back into a prince again.  The princess woke up and realized that she had been dreaming.  She looked and there on the bed was still an icky old frog.

Then the princess thought of her dream.  She also thought of her promise and remembered that she had promised to kiss the frog.  She walked over to the sleeping frog, closed her eyes and kissed the frog on top of it's head.

Just as her lips touched the frog, the frog changed into a handsome prince.  She opened her eyes just in time to see him change.  Then his eyes opened and he saw the princess standing over him.  "You kept your promise," he said, "Even though you made it to a frog."

The prince was handsome.  She liked looking at him much more than at her own reflection.

"Princess, may I ask your father for your hand in marriage?  If he will allow you to marry me, I will take you to my father's kingdom where I will marry you and love you as long as we both shall live."

The princess smiled and answered him quickly.  She promised to marry him and to love him forever.  She also remembered that a promise is a promise, no matter to whom it is made.