Why there are No Tigers in Borneo 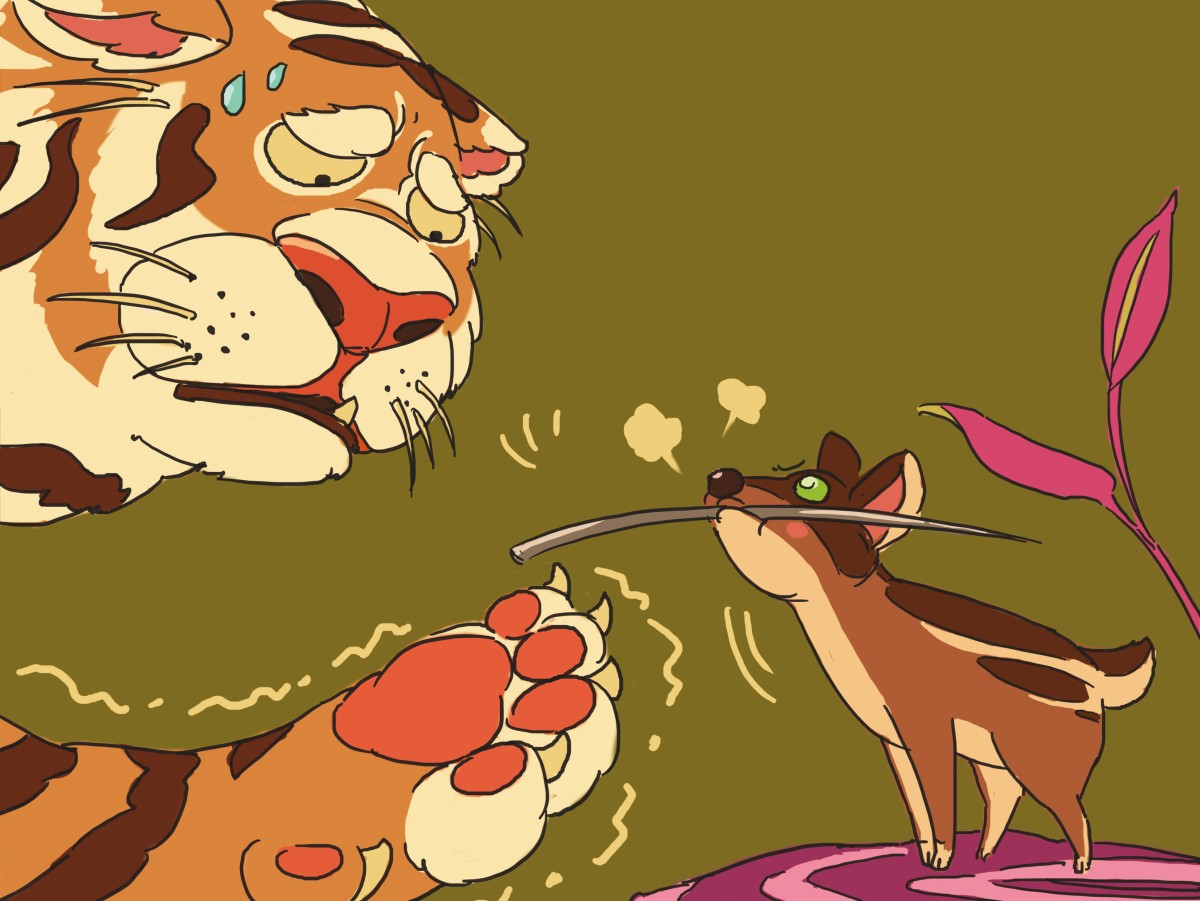 There are many jungle filled islands in Indonesia including the three big islands of Borneo, Java, and Sumatra.  Each island has Tigers roaming in their jungles except for Borneo.  This is the story of why there are no Tigers in Borneo.

Long ago, Tigers roamed almost everywhere.  These hungry animals ate and they ate until food became hard to find.  The Rajah (or King) of the Tigers was the largest of the Tigers.  He called to his messenger, who was also a Tiger.  "Go find the King of the animals in Borneo.  Tell him that I will soon come to his island with my hungry family.  He is to gather many animals for us to eat, and give him THIS..."

The Rajah pulled a large whisker out of his face.  "Show him this whisker, so he will know how very large and powerful I am."  The messenger took the giant whisker and traveled to the island of  Borneo.

The first animal the messenger met was a tiny Mousedeer.   The Tiger called to him, "My master sent me here.  Take THIS to your King.  It is the whisker from my Rajah's face.  Tell him how large and powerful my Rajah is.  My master is coming here.  Your King is to provide enough animals to feed all of the tigers that come to your island."

The little Mousedeer was frightened.  Tigers are CATS, and cats eat mice, and BIG cats like Tigers eat bigger animals like deer and small Mousedeer.  The Mousedeer did not want to get eaten.  He knew he was too small to fight the Tigers.  So, he ran to his friend, the Porcupine.  "My friend," he said.  I need a favor.  Please give me one of your very longest and strongest quills."

"Why do you need one of my quills?  My quills are long and hard and very sharp.  You might hurt yourself with it."

"I will tell you later," said the Mousedeer.  But know that it is important and that you will be helping every animal in the jungles of Borneo."

The porcupine laughed and gave Mousedeer a long, hard, sharp quill.  The Mousedeer carried the quill in his mouth and ran back to the messenger as fast as he could.

"Well?" asked the messenger.  Did you tell your King that the Tigers are coming to Borneo?  Did you tell him that Tigers eat meat and that he is to provide us with animals to eat?  Did you show him the Rajah's whisker so he would know how large my master is?"

The little Mousedeer looked the Tiger in the eyes.  "My master is too busy hunting large animals to come right now and talk to you.  He said for me to tell you that he is hungry for Tigers.  He hopes that all of you will get here soon so he can have dinner.  AND - he sends you THIS..."  The mousedeer laid the large porcupine quill on the ground in front of the messenger.

"What is this?" asked the messenger.  "It is very long and hard and sharp!"

"It is a whisker from my King's face!  He pulled it out, so your master would know how large HE is," said the Mousedeer.

The Tigers decided to look elsewhere for their food.  That is why there are Tigers in jungles in many places around the world.  But, there are NO Tigers in the jungles of Borneo.