The Hare of Inaba 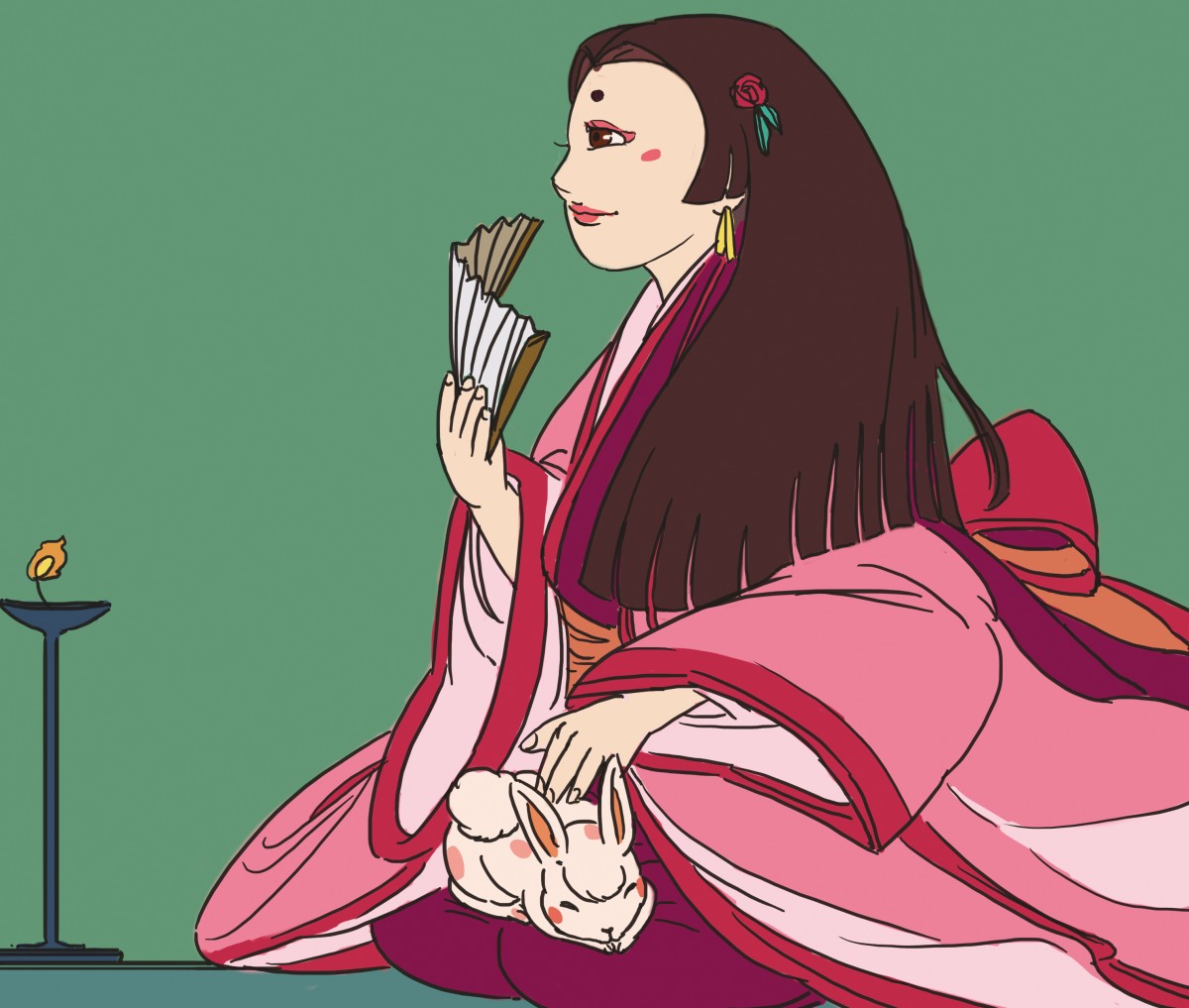 A mighty prince one lived on the north coast of Japan near Tajima.  The prince had eighty-one sons.  Eighty of the sons were strong and bold.  They believed that everyone ought to bow down before them.  They constantly looked for conflicts in order to try their hands in battle.

The eighty-first son was kind and gentle and showed respect for everyone he met.  He had an inner strength that helped him stand tall in the face of difficult situations and did not feel he had to act bold.  This youngest prince was always at peace with everyone around him.

The eighty older sons thought their youngest brother was weak.  They all hated him.  They said, "You treat people as if you were a common woodcutter, and not a cousin of the Emperor himself," his brothers told him.  "Peasants need to be kept in their place!"

Despite their criticism, the younger brother continued to be kind to other people.  This made his brothers hate him more than ever.

Word arrived in Tajima that a beautiful princess in Inaba was hoping to find a prince to marry. "Surely, among eighty of us, the princess can select a husband."  None of them thought their youngest brother was fit to marry a princess.  His spirit was far too gentle for their tastes.  They started off two by two in a long column that looked like a parade.

They consented to allow their brother to come with but only as a servant to wait on them.  He walked at the far back of the column carrying all of the bundles of his older brothers.  They walked over the hills and through the valleys until they came to the sea shore by Cape Keta, close to their destination.

Next to the sea shore on a rock, they saw a pitiful looking pink hare.  This little rabbit was pink because every bit of hair had been pulled off his skin.  He had no fur to protect him from the hot sun and blowing wind.

"Please, good gentlemen," the hare begged of the eighty princes.   "Won't you help me?"  My hair has all been pulled off, and my skin is pink and dry.  I feel like I am dying.  Tell me what I can do to make my fur grow once again."

The eighty brothers were rude and arrogant.  Many laughed at the hare's plight.  One winked at the others and pretended to answer the hare's request for help.  "Go down to the beach and bathe in the salt water of the ocean.  Then go and lie on a rock in the sunshine where the sea air can blow on you."  Then he joined his laughing brothers and continued to march towards Inaba.

The hare ran to the edge of the water and jumped in, just as instructed by the eighty princes.  The salt water stung very badly on his raw skin.  He came out and laid on a rock in the sunshine with the sea air blowing on him, still in hopes that this would cause his fur to grow back.  But, the sun and wind cracked his skin and made him bleed worse than before.  It caused him great pain.

The hare lay on the ground moaning and crying in pain until he heard the voice of the eighty-first brother.  The youngest prince had fallen far behind the column of princes ahead of him because of the heavy bundles he had to carry.  He had just stopped to rest when he heard the moaning sounds and came to investigate.

"I brought this problem on myself," admitted the hare, "After I tell you what happened, you may not want to help me.  You may say I deserve what happened to me."  After saying this, the hare told his story.

"I wandered off from my owner and had been left on the island of Oki .  I wanted to come back to this island, but I had no boat," the hare said in a weak voice.  "I sat along the shore trying to find a way to get from Oki to here when I saw my chance.  While staring at the water, I saw a great salt water crocodile raise its head above the water.  I cried out, 'Crocodile, come here.  I wish to talk with you!'  I said, 'How many crocodiles are there in the sea?'"

"There are more crocodiles in the sea than nobs on the back of my skin," answered the crocodile.

"'Well, there are more hares on land than the number of hairs on my back,' I told the crocodile," said the hare, "So we outnumber you!"

"'All right,' I told him," said the hare. "You call every crocodile in the sea and have them line up side by side between here and Cape Keta near Inaba.  I will run across your heads and count each crocodile.  Then, I will call all my brothers, and you can count us."

"So, the crocodiles all came together and lined up side by side in a long row from Oki to Inaba," continued the hare.  "'You must all close your mouths so I can hop from head to head and count you,' I told them."

The hare explained how he hopped on the bridge made of salt water crocodiles all the way from Iko to Cape Keta.  "But, I was too clever for my own good," said the hare.  As I reached the last crocodile, I said, 'You silly creatures.  Do you really think I wanted to count you?  I only wanted you to make a bridge so I could safely get to Cape Keta.  Thank you for helping me get here!"

"Then, the last crocodile caught me.  It would have been kinder if he had eaten me, but instead he pulled every hair off my body. 'We want to know how many hares there are on land,' he said, 'So, we will count the hairs that came from your back!'"

"You deserved to be punished," said the youngest prince.  Still, no one should ever be deliberately cruel to others."

"I know I was wrong," said the hare.  "But I am worse off now than I was.  I asked a group of eighty princes to help me.  They told me I could grow my fur back if I bathed in the salt water and let the sun and sea breeze touch my skin.  But, now I am in more pain than ever."

The eighty-first prince felt sorry for the hare and picked it up.  The prince carried the hare to a sweet, fresh water spring and dipped the hare in the fresh water.  This removed the salt from his wounds and eased the pain a little.  Then the prince carried the wet rabbit to a field of kaba flowers.  The prince picked the blooms off the flowers and spread them on the ground.  He instructed the hare to roll around on the flowers and to let the petals cling to his sore skin.

The flowers eased the pain.  The hare knew his white fur would grow back again, thanks to the help of the kind young prince.

After helping the hare, the prince picked up his bundles and continued his journey.  When the tired young man finally caught up to his brothers, they were very angry.  The beautiful princess had refused to talk with them.  She had heard that the brothers were rough and cruel to others and chose not to see them.  The eighty brothers acted like it was the youngest princes fault that none of them could marry the princess.

Just as they were about to return home, a messenger arrived at their camp.  He had been sent by the princess.  The first prince said, "My fortune is changing.  She has sent for me," the oldest brother said.

The second, said, "You are wrong.  She has sent for me, as I am the best looking."

The third said, "You are both wrong.  I am the most intelligent.  The princess wants to marry me!"

The brothers all began to argue about who was to wed the princess until the messenger clapped his hands to quiet them all.  "The princess wants NONE of you.  She wished to see your servant, the one who carried all of your bundles."

The eighty-first brother laid down the bundles and followed the messenger through the palace gates, into the palace and into a large room where he saw the princess.  The long journey was quickly forgotten when the prince saw the princess.  She was the most beautiful woman he had ever seen.  Beside her stood a pink colored hare that was just starting to grow back the tiniest amount of white fur on its skin.

"Good friend," she began.  "I sent for you to thank you for what you did for my pet hare.  He has just come to tell me about it.  How is it that one as kind hearted as yourself is only a servant for the eighty princes from Tajima?" the princess asked.

Then, the eighty-first prince told her, "Beautiful Princess, I am not a servant.  My eighty brothers and I all wanted to come and see you.  But, my brothers dislike me and made me walk behind them, carrying their burdens.  I tell you that I am of royal blood and am as much of a prince as they are."

"How can I repay you for helping bring comfort and healing to my poor hare?" the princess asked him.

"The one thing I want most is to be here with you," stated the prince.  "After seeing your beauty, nothing else could ever please me more."

This is how the youngest prince came to stay at the palace.  As for the eighty older brothers, they had to carry their own burdens home and ponder their crude manners.  It is not known whether the brothers ever changed their ways.  It is known that the kind-hearted youngest brother wed the princess and lived happily with her for all of his days.  And, the hare?  It's fur grew back, beautiful and white, giving this story its name, "The White Hare of Inaba."

Readers, this folktale was a re-telling of a story called "The Eighty-One Brothers.  The original source for this story was Japanese Fairy Tales as retold by Teresa Peirc Williston, 1911.  The word "folktales" was once described by Dolche (the author of the Dolche Sight Word List, used for years by American educators) is that they are stories of the "folk" or stories that belong to the "people."  They do not belong to any one teller who has written a particular version of the stories.  This means that this story is yours to use as much as it is mine.  Please feel free to tell it.  But, courtesy calls for thanking the author who brought it to your attention.  So, Thank you, Ms. Williston, and thank you Rand McNally & Company.