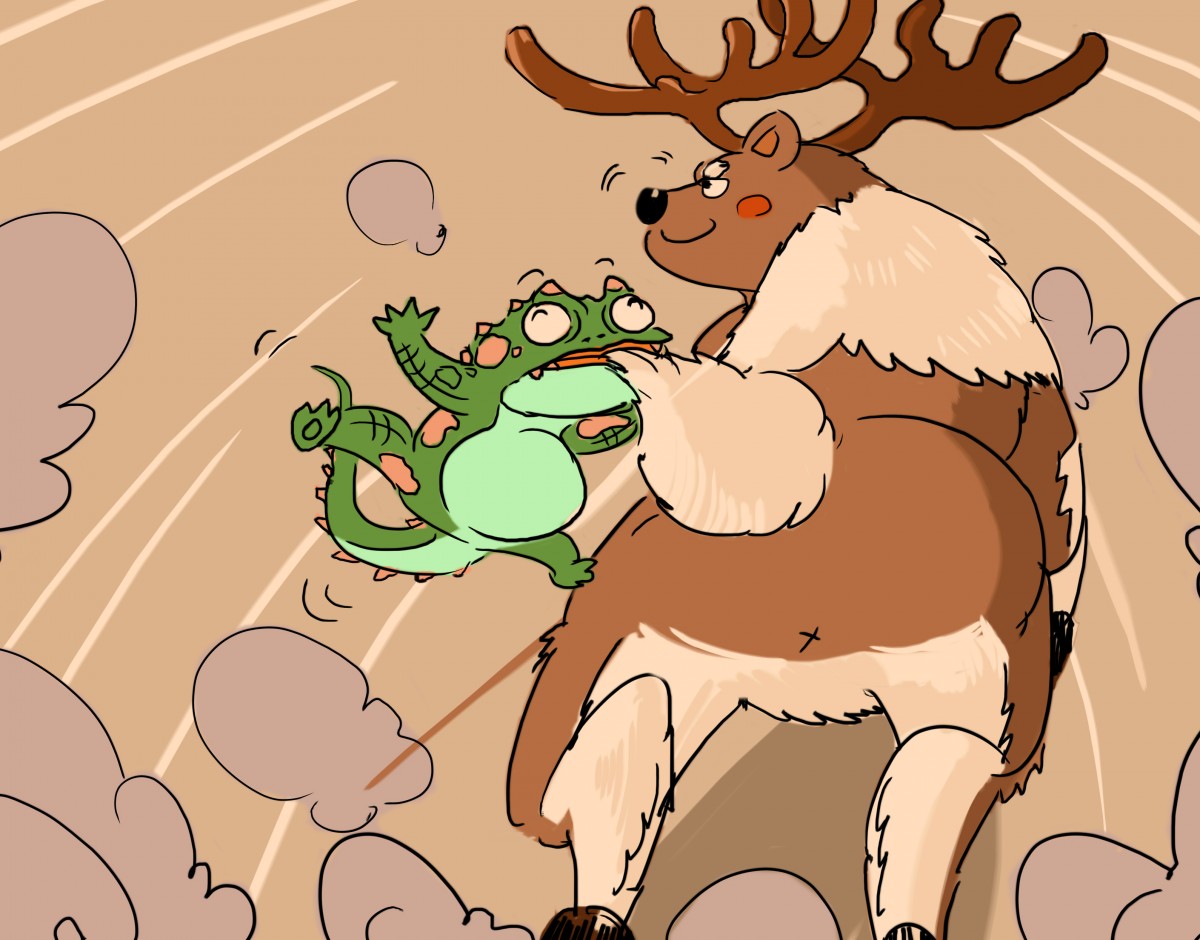 Long ago , the Lord of the Woods called all of the animals together.  "My children," he said, "I want to see how fast you can run. I want to have a race."

"Let us race from here to the big green tree that stands by the road."

"Your idea is very good! (Su idea estas muy bueno!)" said the Lord of the Woods.  "To the winner, I will give the most beautiful sombrero in the world."

But when Big Deer walked by, the excitement of the race disappeared. None of the animals wanted to race against the fast Deer.  None except for the Lizard.

The Lizard said, "If everyone else is afraid, then I will run the race against the Deer."

All of the animals laughed at Little Lizard. "Look at him," they cried.  "His legs are funny and short."

"We funny short animals are close to the ground and don't have far to go if we fall," said Little Lizard.  "I am not afraid to race Big Deer.  I will win the sombrero even if I have to wear it on my back."

The animals still laughed.  But the Lord of the Woods did not laugh.  "The Lizard is little, but he is not afraid," the Lord of the Woods said.  Then he drew a starting line on the dirt with a stick.  "All who are racing, come and stand behind the line with Little Lizard and with Big Deer."

But only the two animals lined up. "I wish to ask one thing before the race starts," said Little Lizard.

"What is it?" asked the Lord of the Woods. "I ask that all of the animals close their eyes when the race is to start."

When the animals opened their eyes, all they saw was a cloud of dust on the road.  The animals saw big Deer, but no one saw Little Lizard.  They thought he must have been buried in the dust.  The Lord of the Woods went straight through the air to the big green tree that stood beside the road.  There, he stood under the shade of the tree and waited for the winner to arrive and sit on the bench.

The Lord of the Woods watched with interest as the race went on.  All of the other animals watched the cloud of dust that moved farther away from them and closer to the tree.  They thought they could see Big Deer running, but couldn't see the Little Lizard.  Poor Little Lizard must be buried in the dust. When Big Deer came to the bench under the big green tree, he found the Lord of the Woods waiting to crown the champion with a beautiful sombrero.

Big Deer started to sit on the bench - when he heard a voice - saying, "Please do not sit down on me senor.  I told you I would get here first, and here I am."

Big Deer was so surprised that he could not say a word, He just ran off embarrassed.  Have you ever noticed that deer usually run off when they see anyone standing near them?  He had lost the race to Little Lizard.  The other animals came to the tree as soon as they could to see Big Deer and to congratulate him.  But what they saw was Little Lizard wearing the most beautiful sombrero en todo el mundo (in the whole world) on his back.

Since the big sombrero was uncomfortable for the little lizzard, the Lord of the Woods put beautiful red points along the back of the lizard to remind everyone how he had won the race against Big Deer.

Of course only the Lord of the Woods knows that Little Lizard only won by biting the tail of Big Deer and hanging on tightly as Big Deer did all of the running. Only when Big Deer turned around to sit on the bench, did Little Lizard let go and drop onto the bench to get there first.

That's the story of how Little Lizard won the race and beat Big Deer and about how lizard got his red color on his back.

Dr. Mike Lockett is an educator, storyteller and children's author from Normal, IL. Dr. Lockett has given more than 4000 programs across the USA and as far away as eastern Asia. Contact Mike by writing to Mike@mikelockett.com in order to book him for a storytelling program.