How Rabbit Got Wisdom 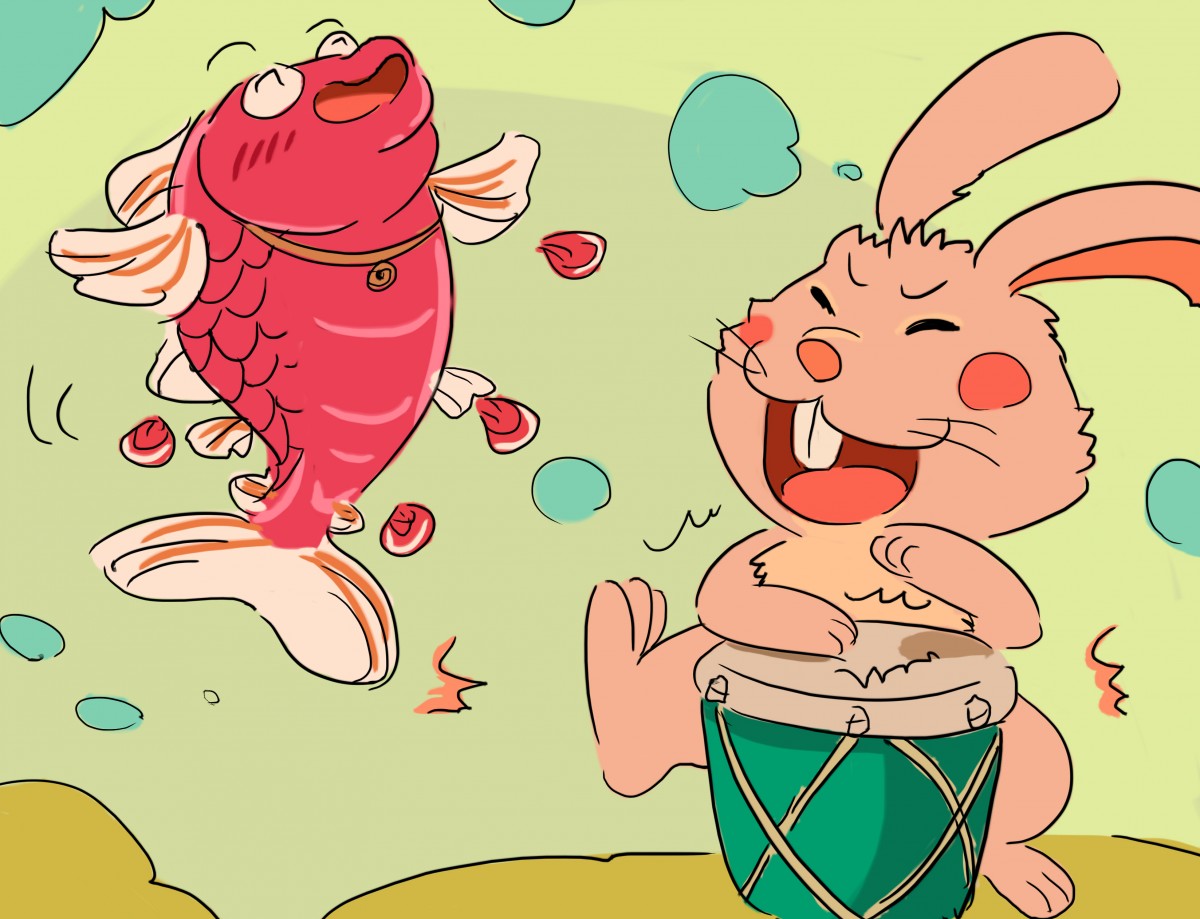 "I will give you wisdom, little Rabbit, only if you can do three things.  First, bring me scales from the Big Fish that lives deep in the sea."  Sky God knew Rabbit could not swim.  So this should be an impossible task.

"Second, bring me a bucket of milk from the Wild Cow."  Sky God knew that Wild Cow was to wild and too fast to ever be milked.  So this was also supposed to be an impossible task.

"Third, bring me a tooth from the Angry Leopard."  Sky God knew that Angry Leopard was too fierce to ever let any animal take one of its teeth.  So this was certain to be an impossible task.

Rabbit believed that nothing was impossible if one tried long enough and hard enough.  So he went out to do the three tasks and earn wisdom from the Shy God.

First Rabbit went to the sea shore where Big Fish lived.  He took a drum and began to beat a rhythm.  Big Fish heard the drum beat.  He came to the surface to listen.  Soon, Big Fish climbed out onto the sand and stood on his tail.  He began to dance.  He whirled and danced so fast that part of his scales fell off.

Rabbit stopped playing.  Big fish jumped back into the sea.  Rabbit picked up the scales.  He had done the first task.  It was NOT impossible.

Then Rabbit went to find Wild Cow.  "You are so wild and so funny," called Rabbit.

"I will show you who is funny," said Wild Cow.  Cow lowered her horns and ran at Rabbit.  Rabbit ducked behind a tree.  Wild Cow hit the tree, and her horns became stuck.  Before Wild Cow could get free, Rabbit ran around the tree and milked her.  He had done the second task.  Rabbit proved this task was not impossible either.

Angry Leopard slipped on the scales and the milk and rolled down the hill.  He hit his face on the rock and lost a tooth.  Rabbit picked up the tooth and ran away quickly.  He had done the third task.  The three impossible tasks had been possible after all.

Rabbit called to Sky God.  "Sky God, I have done your three tasks.  Now give me the wisdom you promised me."

Sky God could not believe that Rabbit had done the impossible.  But when he saw the evidence - the scales from Big Fish, the milk Wild Cow and the tooth from Angry Leopard he kept his promise.  He gave Rabbit the gift of wisdom.  Now rabbit was smart and wise.  He always had enough wisdom to never go near Big Fish, Wild Cow and Angry Leopard ever again.